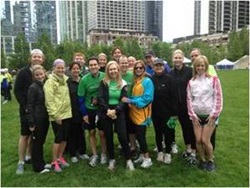 More than 1,500 runners braved wind and rain as they raced along Chicago’s Lakefront in support of brain cancer research during the 2012 Magellan Development Chicago Spring Half Marathon and 10K on Saturday, May 12. The event raised more than $100,000 for the Northwestern Brain Tumor Institute (NBTI).

Magellan Development has supported NBTI for the past three years by naming it as the official charity of the race, which is held in May during Brain Tumor Awareness Month. The company chose to support the Institute after Louis Berger, the late husband of Robin Loewenberg Berger, chief marketing officer for Magellan Development, was diagnosed with a brain tumor.

“Magellan is proud to support the Northwestern Brain Tumor Institute in its quest to find improved treatments and eventually a cure for brain cancer,” said Loewenberg Berger. “This race is a wonderful way to commemorate Brain Tumor Awareness Month and help educate the public about this disease.”