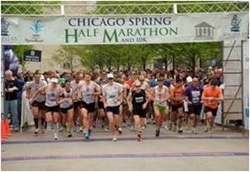 On Saturday morning, more than 3,000 runners will pound the pavement in support of brain tumor research at the 2012 Magellan Development Chicago Spring Half Marathon and 10K. The race benefits the Northwestern Brain Tumor Institute (NBTI) which is a comprehensive program that merges clinical research with medical and surgical treatment for brain and spinal tumor patients. Among the runners will be physicians, nurses and other clinicians, as well as many people personally affected by brain tumors.

One of those participating will be 59 year-old Charlie Porter, a resident of Evanston, who is a patient of NBTI and an avid runner. Porter ran track and field for Northwestern University in the 1970s and picked up competitive running again about seven years ago. A member of the Evanston Running Club, Porter participates in team relay races that cover distances up to 200 miles over time spans of 22 to 25 hours.

“Running feels good, it helps you clear your mind,” said Porter. “I run to relax, it’s meditative. It’s also time to think about work and come up with some productive ideas.”

Several years ago, Porter started to experience strange symptoms ranging from heart palpitations to shortness of breath, stomach issues and an overall feeling of being unwell. He saw a number of doctors, but couldn’t find a clear answer as to what was making him sick. As his health declined, so did his ability to keep up with his running.

“I just felt lousy,” he explained. “No one could figure out what was going on with me.”

Eventually an MRI revealed that Porter had a tumor on his pituitary gland. Knowing that he would need surgery, he sought opinions from several surgeons eventually deciding to have the procedure at Northwestern with James Chandler, MD, co-director of NBTI.

“Dr. Chandler explained it best and was upfront about what to expect so I felt very comfortable with him,” said Porter. “The tumor was removed through my sinuses instead of by splitting open my skull. I felt better very quickly and was back to running in three weeks.”

Today, Porter says he notices both a physical and mental difference since his surgery.

“I feel much more positive and have a better, more relaxed outlook,” explained Porter. “I plan on doing a lot more running. I’m hitting 45 to 50 miles per week and will be at 60 to 70 miles per week this summer.”