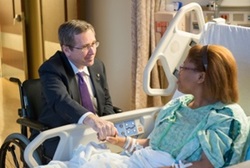 Illinois Senator Mark Kirk recently met with stroke experts at Northwestern Memorial Hospital to discuss legislation aimed at improving stroke research and treatment.
Stroke is the fourth leading cause of death and the number one cause of major disability in adults in the United States. Sen. Kirk said one of his chief goals is getting victims back to work as soon as possible.

"I would just think with a couple hundred thousand Americans not returning to work after a stroke, it's an incredible waste for the United States," said Sen. Kirk at the April 16 meeting. Kirk also held a press conference and met with Kimberly Rodgers, a Northwestern Memorial Hospital patient who recently suffered a stroke.

The National Institutes of Health (NIH) has pledged $2 million in grants to a new network dedicated to advancing research and therapies for stroke. The Chicago Stroke Trials Consortium is a partnership among Northwestern Medicine®, Ann & Robert H. Lurie Children’s Hospital of Chicago, John H. Stroger Jr. Hospital, Loyola University Medical Center, Rehabilitation Institute of Chicago, Rush University Medical Center, and University of Chicago Medicine that will build an infrastructure to support clinical trials for stroke prevention, treatment and recovery. Northwestern University will be the regional coordinating center for the consortium and administer the project over the next five years.

“This consortium brings together the city’s leading stroke experts and top medical centers in an integrated approach to improving treatment of stroke and reducing death and disability from the disease,” said Prabhakaran, who is also an associate professor of neurology at Northwestern University Feinberg School of Medicine. “The primary goal of the network is to rapidly develop, promote and execute high quality, multi-centered clinical trials that will study interventions for prevention, treatment and recovery from stroke in both adult and pediatric patient populations.”

Every 40 seconds, someone in the United States has a stroke. Stroke is the fourth leading cause of death and number one cause of adult disability leaving more than two thirds of survivors with lasting impairment. While the risk of having a stroke increases over the age of 55, a stroke can occur at any age.

“The Chicago Stroke Trials Consortium is raising both the ceiling of stroke care by creating an environment that supports major scientific advancement, and raising the floor of stroke care by helping to ensure that every stroke patient receives the care they need, which in turn can lead to fewer stroke-related deaths and disabilities,” said Lloyd Jones. “We are proud to support this dynamic effort to reduce stroke-related deaths and disabilities in Chicago and beyond.”

In January 2012, Sen. Kirk suffered an ischemic stroke. The stroke, which stemmed from a blockage that prevented blood flow to the brain, required two operations to relieve the swelling in his brain. He remained at Northwestern Memorial until February, when he was transferred to the Rehabilitation Institute of Chicago. After nearly a year of intensive recovery and rehabilitation, Sen. Kirk returned to work at the U.S. Capitol on Jan. 3, 2013.