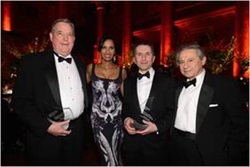 Endometriosis, a reproductive disorder that affects an estimated 176 million women around the world, is one of the top three causes of infertility, but is also one of the most treatable. The Endometriosis Foundation of America (EFA), co-founded by Tamer Seckin, MD and “Top Chef” host Padma Lakshmi, works to raise awareness of the disease and generate funding for endometriosis research.