Star Wars “bad guys” (a Storm Trooper, an AT-AT driver and an Imperial Biker Scout), are really "good guys" at heart. They were joined by R2D2 to bring some holiday cheer to children in the pediatric units at Northwestern Medicine Central DuPage Hospital on December 17.  The characters, who were sporting meticulous costumes, are all volunteers from the 501st Legion Midwest Garrison, a national group of Star Wars costume enthusiasts.

“It is so heartwarming to see the interaction between the Star Wars characters and our patients. It helps these children and their families take a step away from their medical treatment and just be a kid again.  You see the parents eyes light up as well, as these characters take many of them back to their childhood,” says Danielle Fleckenstein, a child life specialist at Northwestern Medicine Central DuPage Hospital.

Organizer Eric Werner, a member of the 501st Legion – Midwest Garrison, says all the participants are volunteers who donate their time and own money to recreate the uniforms and weaponry of the villains.

“We are sharing our love of Star Wars.  And it is especially fulfilling to share that passion with children in the hospital.  With as popular as Star Wars is, it makes for a brighter hospital stay,” says Werner.

Werner teases that organizing the hospital visits was the only way his wife would let him join the club, and now it has become a huge part of both their lives.  “But it is so worth it to see the huge smiles on kids’ faces as we offer them a distraction from everything going on around them,” said Werner.

The volunteers all have full-time jobs and work around their busy schedules to make hundreds of charity appearances every year.  When the “bad guys” who visited Central DuPage Hospital on Sunday take off their armor, they are a salesman, a music teacher, an HVAC guy and a paramedic.

The 501st Legion visits Central DuPage Hospital every other month, but the holiday visit was extra special because R2D2 came along. The life-size replica of R2-D2 cost a Naperville Garrison member about $10,000 and took six months to build.

“He is a show stealer,” says Werner. 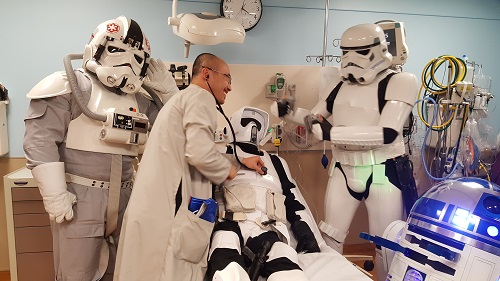 Fleckenstein adds that the visits are great for staff as well, who welcome a bit of levity, during what sometimes can be a very difficult day. And some of the staff, like pediatric emergency room physician Dr. Brian Hang, who is a huge Star Wars fan, were as excited, or perhaps even more excited, than the kids.

Midwest Garrison is a non-profit organization.  They ask for no money, and instead if a group would like to make a donation, they ask instead that it be made to a worthy non-profit in their name.


Check out these NM Care Areas: