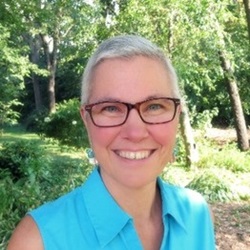 Linda Difino was sitting in church when she felt something under her ribs. After months of experiencing what seemed to be minor incontinence issues, Difino decided she wasn’t going to ignore this latest symptom. Both of her grandmothers had ovarian cancer, so she made an appointment at Northwestern Memorial Hospital. Two days after an ultrasound suggested the likelihood of ovarian cancer; Difino had surgery to remove her ovaries. Because post surgery tests revealed that her cancer had spread, she underwent three months of chemotherapy which she completed on April 17.

“Looking back, I realize my symptoms were easy to blow off,” said Difino, a Lombard resident and mother of four children ages 9 to 26 years old. “My symptoms were fairly minor and I figured it was a part of the aging process. But I shouldn’t have ignored them. If something feels wrong, get it checked out. The longer you wait, the worse it can get.”

To help women like Difino - women living with ovarian cancer past or present - Northwestern Medicine® and the Robert H. Lurie Comprehensive Cancer Center of Northwestern University are hosting the Ovarian Cancer Survive & Thrive program on Saturday, Sept. 28. The one-day, free interactive course is also for women at increased risk of developing the disease along with their families and caregivers.

One in about 70 women will get ovarian cancer in her lifetime, according to the American Cancer Society. In most cases, doctors can diagnose ovarian cancer within three months of the onset of symptoms, and if ovarian cancer is caught early, before the cancer has spread, the survival rate is about 93 percent. However, the five-year survival rate for women who have later stage cancer drops dramatically, which is why it’s so important for women to listen to their bodies and report any symptoms to their physicians, said Emily Berry, MD, a Northwestern Medicine gynecological oncologist.

“Ovarian cancer often has no symptoms in the early stages,” said Berry, who is also a member of the Lurie Cancer Center. “When women do experience symptoms, they tend to be symptoms that are more commonly caused by other things or are easy to ignore such as pelvic discomfort, persistent indigestion, low back pain, abdominal swelling or difficulty eating. The bottom line is early detection saves lives because survival rates are much higher when this disease is caught early.”

Difino has three very important reasons to spread the word about early detection of ovarian cancer – her daughters, Darcy, 26, Janna, 24, and Nina, 22. As a way to help her daughters and help doctors learn more about ovarian cancer, Difino is also participating in a clinical trial that has her sticking to a low-fat, high-fiber diet. She’s also exercising and, in a way, has never felt better.

“I had some rough days but I’m no quitter,” said Difino, who is 50 years old. “I'm getting active again and my energy level is almost back. I feel like I have my life back.”

The Ovarian Cancer Survive & Thrive event will be held from 8:30 a.m. to 5 p.m. on Sept. 28 at the Robert H. Lurie Medical Research Center, 303 E. Superior St. There women will find the latest information, valuable resources and access to experts in the field. It will also be an opportunity for women to connect with others in the ovarian cancer community. The program is made possible by the generous support of Bears Care®, the charitable beneficiary of the Chicago Bears.