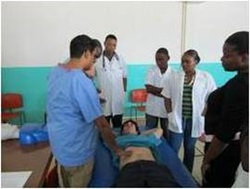 On February 13, we shared an update from Dr. Rahul Khare who was volunteering in Haiti to teach emergency medicine. Along with teaching medical students the art of emergency medicine, Khare and his team also helped Justinian University Hospital in Cap Haitien learn how to best utilize a newly constructed critical care unit (CCU). While a CCU is a familiar site at American hospitals, it’s a new concept to the Haitians. Below are some reflections on the trip from Dr. Khare, who returned to Chicago last week:

Our goal was to make sure that the CCU is used correctly and was well-run. We also helped in the ER, but did not to take over control of the ER, as we would be gone in a week and knew that it would go right back to where it was prior to our arrival. With that in mind, we needed to educate and help the MDs in the ER and CCU to see and understand how different operational changes can really make an effective change. The ER nurse who was leading my group, Leanna, with the help of the lead resident, developed a triage protocol, waiting space, and mentality of sending patients who did not need the ER to their required areas quickly. It was amazing what the place turned into: an efficient, almost wait-free ER.

After two days of observing and talking with the residents, attending physicians, nurses, and others, we got a good sense of what was going on. I witnessed many different kinds of cases. In the CCU, I participated in a trauma case where a pickup truck with 5 people in the back of the pickup rolled over. All came to us. I witnessed how they triaged two to the CCU and three to the ER. It was a beautiful scene, as Haiti does not have a triage system or a trauma center mentality.

Later that day, the senior resident came to me and asked me if I’ve ever seen a dislocated jaw. I smiled and said I had. I asked him, is it a young girl who could not close her mouth after yawning? With wild eyes, he said, “Yes! How did you know?!” Funny, the things you see as a resident in emergency medicine. I told him to put her in the CCU where we could mildly sedate her and reduce it. He was very excited. We gave her 5mg Valium IM, and 15 minutes later I taped up his thumbs (you sometimes get an accidental snap of the jaw, causing the patient to clench down on your thumbs) and he mostly reduced her jaw on his own. It was a fun, very gratifying procedure. The patient was extremely happy.

The physicians and patients in Haiti are amazing people. Their stories pre- and post- earthquake make me remember why I initially came. Their resilience is why I continue to come back.

For more from Dr. Khare’s trip, read a story on the Northwestern University Feinberg School of Medicine website.