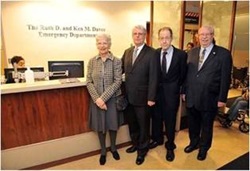 Northwestern Memorial Hospital’s Emergency Department (ED) was recently named for Ruth D. and Ken M. Davee. A generous gift from The Davee Foundation, which was created by the late Mr. Davee, will help position the ED to better serve its growing numbers of patients.

Ken Davee contributed to Northwestern Memorial every year from 1972 until he passed away in 1998. After his death, his widow, Ruth Davee, continued her husband’s tradition of supporting the hospital. She became particularly interested in new initiatives to improve the patient experience in the ED. Under her guidance, The Davee Foundation provided support for projects that improved both communication and patient care in the ED, thus creating a more patient-centered environment.

When Mrs. Davee passed away in 2011, Northwestern Memorial was chosen as the location for her memorial service. The Davee Foundation’s board members honored Mr. and Mrs. Davee by creating the Davee Innovations Research Endowment, which will advance novel research projects and patient-centered programs in the field of emergency medicine.