The Gift that Keeps on Giving: The Marianjoy Scholarship Program's Personal Impact 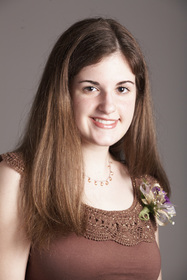 Amanda Fowler is a marketing and public relations specialist at Marianjoy Rehabilitation Hospital, which is now part of Northwestern Medicine.

Twenty-two years ago, the Marianjoy Scholarship Program began as a retirement gift from employees to the first CEO of Marianjoy Rehabilitation Hospital, Bruce Schurman, who had always been a champion of higher education opportunities for students with disabilities. What began as a goal of one or two scholarships has blossomed into a program that has awarded more than 400, amounting to more than $870,000.

The scholarship is open to any student with a permanent physical disability or functional impairment, with a residence in the Chicagoland area. An independent committee makes the selection out of a pool of applicants that increases in size every year. Winners are determined by financial need, academic achievement, community involvement and personal essay. Students need not be former Marianjoy patients, though many of them are.

I was one of those patients-turned-Marianjoy-Scholars, exactly one decade ago—and now, I am an employee of Marianjoy Rehabilitation Hospital and Northwestern Medicine. It’s hard to say whether the experience of my traumatic brain injury or the scholarship changed my life more. Age 20 is already a complicated transitional time, the first year out of your teens, when you’re finding out what it means to be an adult in college. When that is compounded by having a disability—and for me, a suddenly acquired one—figuring out my identity became even more daunting.
One of my top goals as a patient was to get back to college, as soon as possible. My doctors, therapists, family and friends supported my goal, but we all knew it would be harder returning than it was beginning. Though my parents never said it, I knew my medical experience had been a hardship, another layer to the financial strain of having two daughters in college.

My speech-language pathologist had been working with me on exercises to prepare me for being a college English major again, like writing essays. One day, she told me about the Marianjoy Scholarship, designed for students just like me. I was at once hopeful, surprised and intimidated. Knowing there were other students in this boat of uncertainty gave me a sense of belonging, but it also made me unsure I’d be able to hold my own in a competition with other incredibly talented students.

From the moment I began crafting my application essay, I realized something was changing. I had to tell the audience who I was, so first, I had to tell myself who I was. I realized my disability didn’t define me; it was only a part of my identity. I was still an English major, a hopeful writer—and finally, I had something to say that I thought people might want to hear. In my current job role, I’ve seen this moment of self-discovery in many first-time scholarship applicants, and I’ve watched them bloom over the years with the realization of the dreams they defined in those first essays. It’s a profound experience to watch this process—as significant to me now as it was when I was one of those students, myself.

I was ecstatic when I found out I won the Marianjoy Scholarship. It reinforced the kernel of idea that eventually became my career path. The scholarship meant this group of people not only believed in my ability to go back to school, but also that they believed in my dream, as an English major, of using my words to help others. The huge financial relief to my family, who was suddenly facing this unexpected medical situation, made my dream of school a tangible reality. Of equal importance, it was also tremendous boost to my confidence and self-esteem. I knew going back to school so soon with a completely different skillset would be difficult—and I was not wrong about that—but I was also going back with the support of the Marianjoy Scholarship behind me. With so many people who believed in me, I had no choice but to believe in myself, even when I met new academic challenges at school.

That inspiration has carried me these ten years through four Marianjoy Scholarships, my Bachelors of Arts in English, my Masters in writing and publishing, my internships at publishing companies and my now employment at the same place that saved not only my life, but also my dreams. That inspiration and gratitude will continue to guide me for the rest of my life, in my drive to help others as the program helped me.

To meet some of the amazing Marianjoy Scholarship winners of 2016, visit Northwestern Medicine on Facebook.