The Vase: A Donation of Talent 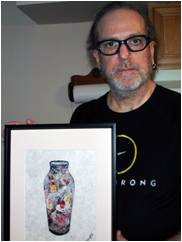 Gerald “Jerry” Van Gemert II arrived at Northwestern Memorial Foundation’s office on August 12 with an unexpected but very welcome donation. Jerry gave not only an original piece of artwork which he had created to honor his Northwestern Memorial Hospital caregivers; he also gave us the gift of his story and his experiences.

In the summer of 1979, Jerry had his first experience at Northwestern Memorial when one of his friends was injured. “It was during the weekend of the Air and Water Show—almost 34 years to the day,” he said during his visit. “My buddy hurt himself badly imitating me diving into the shallow waters near Olive Park.” Jerry pulled his friend out of Lake Michigan but he wasn’t moving or responding to any attempts to revive him. He was brought to the Emergency Department and it turned out his neck was broken in several places. “We thought he might never move again, but he was able to leave, walking, with his head and neck held in a halo brace,” says Jerry. “That was only one of what I consider to be several miracles.”

Jerry considers his long-term recovery from the disease of addiction to be a miracle. A recovering addict with more than 26 years of being consistently clean, he credits his faith for the ability to stay clean and grow as a human being. He has been an artist since childhood, working with various media but specializing in original collages.

In 2010, Jerry applied for health insurance but was denied when a health exam revealed that he had high Prostate-Specific Antigen (PSA) levels, which may indicate the presence of prostate cancer. Tests also indicated that he had high cholesterol. He came to Northwestern Memorial for healthcare and submitted an application for financial assistance, due to the fact that he had been denied insurance. His application for assistance was approved, and he began receiving care with Cynthia A. Lagone, MD, as his primary physician.

Over the next several years, Jerry went through umbilical hernia surgery, a robotic prostatectomy, removal of malignant lesions and an eye examination with prescription bifocals. Concerned about his medical bills, he monitored his accounts at Northwestern Memorials online, and saw them drop to zero over time as they continued to be covered by the hospital’s financial assistance program.

He says, “During this time, I thought about how I could give back in response to what had been so freely given to me. I wanted to create a piece of artwork dedicated to Northwestern Memorial. I did not have a subject for this artwork, yet I wanted to create something that would be worthy to appear within the hospital.”

“One morning, I awoke with reflections from my early childhood passing before my eyes. When I was in third grade, I often drew vases using crayons, and my teacher adored my drawings. Based on artwork at school, she submitted my name for a scholarship to a school where my artistic talent could be nurtured. However, I was denied the opportunity to take this scholarship when my mother refused to sign the necessary documents.”

“After recollecting this incident, I decided to create a vase collage. I work with selected items on magazine pages with specific colors or textures that catch my eye and cut them out with my scissors. These pieces are then glued into place with precision. I tend to work for three or four hours without cease every day. This occasionally means I may not leave the work for an entire day except for minor breaks.”

Jerry presented his finished work (shown above, with the artist) to Northwestern Memorial Foundation on August 19. The vase collage is currently in the office of the foundation’s president, Stephen Falk, while arrangements are made for its permanent installation in a more public space.

Falk says, “Jerry’s gift is very significant to us. It’s not every day that a beautiful, original piece of art is created to honor caregivers and staff at Northwestern Memorial. It was delivered and donated to the hospital by the artist himself. And just as important, Jerry gave us the gift of the story of his life and the story behind the art.”

Northwestern Memorial Hospital provides community services that touch the lives of our patients and those beyond our walls. To donate to this program, click here.