Turning off Tremors with Surgery 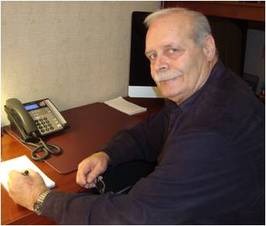 Throughout my career, I’ve had the privilege of meeting and sharing the stories of many incredible patients. I’m always impressed and inspired by their willingness to share their experience most often with the goal of helping others in similar situations. Typically, I meet patients after their treatment and when they are well on their way to recovery. This summer I had the opportunity to do something different. Tom Rogers, a 66 year old retiree who lives in Oswego, Ill., allowed me to follow and document his journey as he underwent deep brain stimulation surgery for essential tremor.

I met Tom and his wife Pam for the first time the day prior to his surgery. He told me about living with essential tremor for nearly 30 years and demonstrated how it was impossible to use his left, dominant hand to do something as simple as write his own name. As his condition worsened, Tom taught himself to use his right hand, but the tremor was slowly progressing to that side too. It was at that point that he decided to undergo deep brain stimulation surgery to “turn off” his tremor.

Tom allowed cameras to tape his surgery as it happened. DBS involves implanting small electrodes into very specific region deep in the brain to deliver continuous high frequency electrical impulses. Each electrode is connected to an extension wire that runs under the skin down to the chest where a battery pack is implanted. This pack acts as a ‘pacemaker’ for the brain and helps control the tremor.

What’s truly fascinating about DBS is that the patient is awake for part of the operation. Tom became a member of the surgical team, helping the neurosurgeon and neurophysiologist determine the perfect spot for electrodes by responding to their commands and answering questions. He was asked to mimic bringing a glass to his mouth because this was something that was impacted greatly by his tremor. When the right spot was found, it was obvious immediately and Tom felt the difference. The tremor stopped in his hand and he announced “Doc, you found ground zero!” A moment he remembers vividly.

I had the pleasure of catching up with Tom in late November and I’m happy to report that he’s doing extremely well more than six months post surgery. In most DBS cases, in the months following surgery the implanted battery pack is programmed to achieve the optimal balance between stimulation and medication. In rare cases, the surgery itself turns off the tremor by causing what is known as a micro-lesion effect. Tom was one of these unique situations; since surgery his device has not been turned on and his tremor has not returned. He is grateful to be able to drink a glass of water, make a sandwich, and even write checks to pay his bills; all things that were limited by his tremor. As Tom put it, “It’s like I’ve been given back a new life.”