Unbroken: The Frank and Lynn story 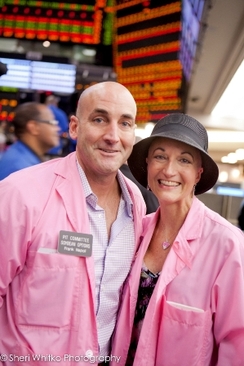 To follow, we’re sharing an excerpt from the letter Frank used to raise the money, which we found especially befitting for today, October 22, Lynn’s birthday. As you’ll see in her video story, Lynn’s doing great. She’s completed her treatment at Northwestern Memorial Hospital’s Lynn Sage Comprehensive Breast Center; she is cancer free; and rightfully so, she is in full “celebrate life” mode. Northwestern Medicine wishes you a Happy Birthday Lynn!


Dear Friends, My name is Frank Napoli and I have been a broker on the trading floor for 17 years. My sister, Lynn Marynowski, has worked on the floor for 25 years. Earlier this year, my sister had a mammogram, which showed no signs of a problem. A month later, she noticed a lump under her right breast. She immediately went to Northwestern for a checkup and was informed it was metastatic cancer. Lynn opted to have a double mastectomy ASAP. The 5.2 cm tumor was removed and cancer was found in 4 of the 9 nodes removed. After the surgery, Lynn's cancer was staged 3A. She has recovered from the mastectomy and recently had her port put in for Chemo. She will also need radiation. I love my sister very much, so needless to say - this came fast and was difficult for our whole family. I have been so very proud of her and the strength she's shown. She has been an inspiration from the start and we are all just taking it one step at a time. It is as a result of my love for her that I realized I had an opportunity to raise some funds and moreover awareness. The awareness I plan on raising is for men like me, who see the pink all around us, particularly in October, but never let the true severity of the cause set in. In an interesting stroke of coincidence, my sister’s birthday is on October 22nd. When I realized it fell in Breast Cancer awareness month, it gave me an idea. I plan on donating all the proceeds from my brokerage on Lynn's birthday to the Lynn Sage Cancer Research Foundation on that day in Lynn's name. The main purpose of my effort is to raise awareness to my peers about Lynn's story. I want them to be aware, not only of her amazing spirit and courage but that her cancer was missed on her Mammogram! It’s from this example that I hope to encourage every man to go home and reach out to every important woman in their lives and ask if they have been checked and double checked! Thanks for your time, Frank Napoli

A Brother and Sister Unbroken - Northwestern Medicine from bthestory on Vimeo.