What I Learned From my Mom's Battle with Cancer: Cancer is an Assessment of Endurance 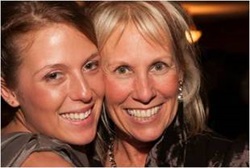 Joy Geallis, the daughter of a Lurie Cancer Center patient, has agreed to share her mother's journey with cancer and what led her to join the Lurie Cancer Center's Patient and Family Advisory Board. Below is Joy's story in her own words.

Allow me to introduce myself; my name is Joy Geallis and I have experienced how cancer can and will forever change an individual’s life. I had the sad privilege of being able to support my mother through her battle with stage III breast cancer. The navigation of this unfortunate situation was skillfully guided by our care team at the Robert H. Lurie Comprehensive Cancer Center of Northwestern University. I will never forget this journey because of the multiple life lessons that it presented to me.

As most know, cancer, or any other disease, does not just begin or end as if a light switch has been turned on or off. It is comparable to a race that takes place over rocky and always slippery ground. It usually seems as though with every step forward a new challenge seems to appear as an overwhelming mountain just as the finish line becomes visible. As the miles passed from surgeries, chemo, and everything in between, to remission and the much anticipated ‘cured’, I decided that this race would never be won as a sprint, rather a marathon that is finished by taking the small steps every day. Quite simply, cancer is an assessment of not only a survivor’s endurance, but also everyone within their realm of influence.

Cancer, the word, within grammatical definitions, is a noun, yet it requires so much action that a verb is much more accurate. Cancer prominently identifies itself by forcing everyone to take an immediate stand against it. I have seen cancer singlehandedly damage an individual by destroying their dignity through pain, humiliation, and fear. Yet, in that very same moment, it brings a sense of determination, courage, and countless other emotions to the forefront of the mind. All of these emotions combine to produce an individual that remains undaunted in the midst of one of life’s greatest challenges.

In my ignorance, I believed that battling cancer was an individual pursuit, until it entered into my family. I now know that it is a team effort, hence the term ‘battle’. Every individual, on the team, is after the cancerous cells that are attempting to destroy a survivor’s body. When a supporter becomes an accessory during the weakest moments of a survivor’s life, the supporter has, in fact, become a necessity to the survivor’s success. The individual with cancer is a human being with a disease and not simply the disease. This may seem like a ridiculous statement, but it is easy to become emotionless during times of distress and defeat. The hardest moments weaken everything from within, but strength lies within the ability to not abandon the hope of today. Watching someone I loved battle cancer, forced me to understand that I might never know the thoughts that produce the tears, therefore before I judge I should, at the very least, understand the fears.

Cancer constantly reminds me that perhaps I focus on the grand scheme of life too often instead of remembering that every failure or triumph begins as a single thought or cell. Please realize that it is one of life’s greatest privileges to celebrate the success of another individual. Therefore, this is my plea to everyone who is in the battle or supporting someone in the battle-allow others to celebrate the triumphs with you. Whether it is the completion of a treatment, scan, simply smiling during times of uneasiness, or accomplishing a goal - celebrate. Don’t give up because it is hard or it looks bleak. This world needs you to encourage the person coming behind or alongside of you.

The cutting edge research from the Lurie Cancer Center is enhanced by their ability to methodically devise a plan to treat the disease, while never losing sight of a patient’s goals and dreams. From watching this part of life unfold, I realized that by participating in the Patient and Family Advisory Board I might be able to help individuals, in the same situation, navigate the dynamic role of being a support to someone in the fight of their life. How spectacular that day will be when cancer is abolished, but while the world finds itself feeling the horrific effects of it, may those who support have the ability to do so graciously, effectively, and without reservation.

For more information about the Lurie Cancer Center or to make an appointment, visit cancer.northwestern.edu.