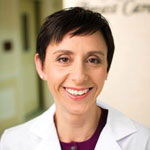 LAKE FOREST, IL – Elisa Glass wasn’t surprised when her annual mammogram showed an irregularity that prompted an ultrasound. “Every year something small was seen on my left breast; my doctor was always cautious and recommended an ultrasound, which had always came back clean,” Glass says. But when radiologist Debra Kanter, MD, recommended a biopsy after the ultrasound, she realized that this year was different.

The biopsy results were the words no one wants to hear: she had breast cancer and would need surgery and radiation. Glass, 59, of Northbrook, had come to Northwestern Medicine Lake Forest Hospital for years and was pleased to learn that an accomplished surgical oncologist had joined the breast care team at the hospital. She met with Tara Breslin, MD, FACS, to talk about surgery and the radiation treatments she would need after surgery.

Breslin had just recently joined Lake Forest Hospital, bringing two decades of research, academic and clinical experience in breast health and breast cancer care. Breslin has been a dedicated breast surgeon for 13 years, and her research has been widely published in medical journals and publications.

Breslin performed Glass’ lumpectomy and removed two lymph nodes along with the tumor. Following surgery, Glass completed four weeks of radiation treatment at Lake Forest Hospital. Because her cancer was detected in its early stage, she was able to undergo a drastically shortened radiation therapy called the Canadian protocol. This treatment condenses the radiation treatments from six weeks to three or four, causing less disruption to patients' lives and allowing them to move on into the recovery phase of cancer quicker.

“I really feel blessed to have caught the cancer early and to have been in the hands of these expert physicians,” says Glass, when describing the experience of surgery and radiation. “It was a relief to have all my physicians, my surgery and my radiation treatments in one hospital. I knew I was getting the best care possible and in the comfortable setting of a community hospital where I’ve been going my entire life.”

“I was pleased that we could deliver a comprehensive diagnostic evaluation and treatment plan, all provided by our Northwestern Lake Forest Hospital team,” said Breslin, medical director of the Breast Care Program at Lake Forest Hospital. “Elisa is a wonderful success story and an example of how treatable breast cancer can be when caught early.