“This appointment is a great honor,” said Pandolfino. “During my 20 years at Northwestern Medicine, I have worked alongside many great mentors, collaborators and friends, all of whom have helped make this accomplishment possible. I look forward to leading our commitment to quality and continuous improvement as we work to develop Northwestern Medicine's already outstanding Gastroenterology and Hepatology Clinical Program into the best in the country” 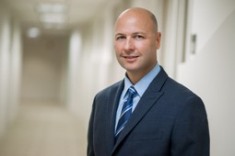 With Pandolfino’s help, Northwestern Memorial Hospital was recently ranked 10th in the country in the U.S. News & World Report 2013-14 Best Hospitals specialty ranking for it's gastroenterology and GI surgery, rising seven places from the previous year’s ranking, making it the highest ranked program in Illinois and Chicago.

Pandolfino received his medical degree from the Loyola University Stritch School of Medicine in 1993, and went on to complete his residency training in internal medicine and fellowship training in gastroenterology at Northwestern Memorial Hospital. His leadership in the Northwestern Medicine Gastroenterology and Hepatology Program first began in 1996, as the chief medical resident in the Department of Medicine.

Throughout his career, Pandolfino has published extensively on gastrointestinal complications in surgery, pH monitoring of esophageal acid exposure, the clinical use of esophageal manometry, and therapies and management of disorders of gastrointestinal motility. He also recently received a master's degree in clinical investigation from Northwestern University.

Northwestern Medicine is the shared vision that joins Northwestern Memorial HealthCare and Northwestern University Feinberg School of Medicine in a collaborative effort to transform medicine through quality healthcare, academic excellence and scientific discovery.