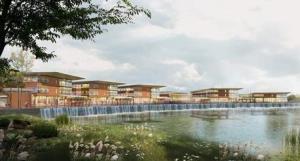 “After a thoughtful process engaging many community members, neighborhood residents and with the guidance of the City Manager’s Hospital Advisory Committee, we are very pleased to have achieved this important step in the approval process for a new hospital,” said Thomas J. McAfee, president of Lake Forest Hospital. “Northwestern Medicine plans to make the Lake Forest campus a world-class destination for health and wellness, offering the highest quality of care to the residents we serve.”

The City of Lake Forest City Council, based on a recommendation from the Plan Commission approved the Campus Master Use Plan last year. The City Manager named a Hospital Advisory Committee to work closely with the hospital’s project team to provide guidance on the development of a detailed plan for a replacement hospital facility and the surrounding campus.

After working with the Advisory Committee, the hospital then presented the detailed plan design to the Plan Commission earlier this fall. Community members, who had been invited to five open houses over the past year during the design phase, were given an opportunity to comment on the final design at the October 3, 2013 open house.