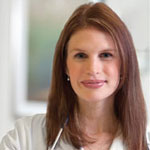 GLENVIEW, IL – CJ Hughes hadn’t been to a doctor in 20 years when he began noticing shortness of breath as he walked. Only five days after first noticing it, breathing was so difficult that he could not get out of bed and walk. He called an ambulance to his Chicago home and smoked what would be his last cigarette before the ambulance arrived.

Upon arrival at Northwestern Memorial Hospital, the emergency team discovered that Hughes, 57, had a massive bilateral saddle pulmonary embolism, involving both the right and left pulmonary arteries, the main suppliers of blood to the lungs. He was treated in the intensive care unit and later transferred to the medical floor where his resident physician was Kate Petrungaro, MD, then in her second year of residency at Northwestern Memorial. “CJ was fortunate to be alive and he left the hospital knowing he had to make serious changes,” said Dr. Petrungaro. “He is an example of how drastically a person can change their life and improve their health once they commit to quit smoking, to start exercising and to getting the preventive care they need.”

After beginning therapeutic treatment for what would become a chronic condition, Hughes left the hospital determined to change his life and improve his health. He continued to see Dr. Petrungaro in the resident clinic at Northwestern immediately after his hospitalization and then followed her to her north shore office to continue his care, even though he had to drive from Chicago for his appointments. He now lives in Fort Lauderdale, FL, and yet continues to see Dr. Petrungaro at her office in the Glenview Outpatient Center for all his healthcare—coordinating his visits and any needed tests when he will be in Chicago.

Four years since he experienced the pulmonary embolism, his health has made a turnaround: his one-and-a-half pack a day cigarette habit is over, and he bikes 20 to 30 miles a day. He focuses on preventive medicine—making regular visits to Dr. Petrungaro to get the tests he needs, including annual evaluation of his heart and lungs and routine blood tests to monitor his cholesterol and blood clotting factors.

“In Dr. Kate I feel like I have a personal physician,” said Mr. Hughes. “People ask me why I don’t find a new doctor in Florida, but it is too valuable to me to have a physician who knows me and my health history to consider doing so. Dr. Kate has helped me make the life changes I had to make and to stick with them over time.”

For more information or to schedule an appointment with Dr. Petrungaro, please call 847.724.4536.