Wendy Callan, RN, was nominated for her support of Lieutenant Commander Tabitha Eden, RN, a nurse in the Northwestern Grayslake Emergency Center 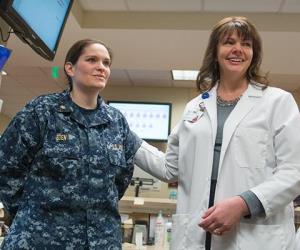 “Wendy has been completely supportive of my challenging schedule over the last year as I prepared for my deployment,“ said Eden. “She always accommodated my training requirements and the last-minute schedule changes that sometimes happen.“

“Although Wendy is very humble about how much she has helped me, having a supportive work environment was one less thing to cause stress in my life, which was hugely important to me this year,“ said Eden.

Eden will be deployed in late February to the Horn of Africa. This is her first deployment since leaving active duty for the naval reserves in 2007 and her first deployment since having children; she and her husband have two boys ages three and four. Her husband is also a veteran, having served in the Marine Corps, completing two tours in Iraq in 2003 and 2004 before they were married. Eden was also deployed to Kuwait in 2004 for six months in support of Operation Iraqi Freedom.

“Tabitha is serving our country, so the least I could do is support her at work,“ said Callan. “It is very emotional for all of us that Tabitha will be away from her husband and her boys, so we want to support her in any way possible.“