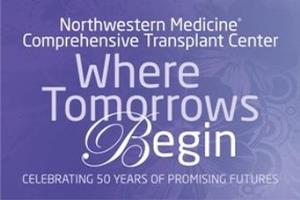 “It is an honor to be able to celebrate five decades of successful transplants, not only because the of thousands of patients we have been able to help over the years, but also because of the number of innovations we continue to help pioneer,” said Michael Abecassis, MD, chief of the division of organ transplantation at Northwestern Memorial and founding director of the Comprehensive Transplant Center at the Northwestern University’s Feinberg School of Medicine.

Northwestern Medicine may also lay claim to one of the most successful kidney transplants in the world. In 1970, Mary Matson, a local business owner in Galesburg, Illinois, received a kidney transplant from a deceased donor. Most deceased donor kidney transplants need to be replaced after 10 to 15 years before a recipient’s immune system eventually rejects the organ as a foreign body. Remarkably, Matson still has the same kidney she received nearly 44 years ago.

“I was so ecstatic when I was told I was going to get a kidney,” said Matson, who was 31 at the time of her transplant. “Before my transplant I didn’t have a lot of stamina, I wasn’t able to even take a short walk. My life before and after I got my new kidney was like night and day. I was able to manage and grow my own business, travel and live a very productive life.”

When organ transplantation first started in the 1950’s, there were no medications that could help prevent rejection so operations were only done for patients who had an identical twin who could donate. The compatibility problem has since been greatly reduced with advances in anti-rejection medications that help control the immune system and prevent it from attacking the transplanted organ. However these medications are not perfect and can have many side effects for patients, including an increased risk for illnesses due to infection.

“For a long time the Holy Grail of transplantation has been to figure out how to create real immune tolerance for transplanted organs in patients without medication,” said Abecassis, who led the team that performed the first liver transplant at Northwestern Memorial in August, 1993. “For the first time, through two clinical trials that are only available here at Northwestern, we have begun to make this a reality using cellular therapies.”

One of those clinical trials, lead by Joseph Leventhal, MD, PhD, director of kidney and pancreas transplantation, uses specially engineered stem cells from kidney donors that allow an organ recipient’s immune system to recognize a new kidney as its own. There are currently 19 participants in the clinical trial, 18 of whom have reached this goal. So far 12 of those 18 have been able to reduce their anti-rejection medication or stop taking it completely. This is the first clinical trial that has been successful in achieving immune tolerance for transplanted organs in patients without medication.

"With the recent breakthroughs we have achieved, we have set new goals for the future. In 10 to 15 years we want to be providing organ transplants that no longer require recipients to take life-long regimens of anti-rejection medications, and we are also currently researching methods of growing organs in the lab that would allow patients to receive transplant organs that were made using their own cells," added Abecassis.

This research is being undertaken at a critical time. The waiting list of patients who need an organ transplant has grown to nearly 125,000 since it began 30 years ago, and that number continues to increase while the availability of organs has remained flat.

On April 6, Northwestern will host an event to celebrate its 50th transplant anniversary at the Westin O'Hare hotel in Rosemont, Illinois at 11:00 a.m. The celebration will include an opportunity for patients to interact with one another and reunite with caregivers. There will also be information about Northwestern Medicine's transplant research and speakers including transplant recipients, living donors and transplant surgeons. For more information and to buy tickets, visit the event's webpage.

Northwestern Medicine's Comprehensive Transplant Center is one of the largest and most successful organ transplant centers in America, and is a leader in both living liver and kidney transplantation. Since its first transplant in 1964, Northwestern Medicine has provided new organs for more than 6,000 people and has become a pioneer in transplantation research. In order to make these critical services available to as many people as possible, Northwestern Medicine has opened satellite clinics in locations that include Peoria, Moline, Glenview and Joliet in Illinois, and Portage, Indiana. In 2006, it also created its own Hispanic Transplant Program to better address the needs of the large Hispanic patient population who call the Chicago area home.

To learn more about transplantation services and research at Northwestern Medicine, please visit the center’s website or call 312.695.8900.

Media Relations 312.926.7432​
* Northwestern Memorial HealthCare (“NMHC”), nor any of its clinical affiliates, shall be responsible for any improper or incorrect use or disclosure of the personal information described and/or contained herein and assumes no responsibility for the security of this website. As an individual “Requesting a post-transplant buddy,” you assume full responsibility for entering information at this website, and you understand and agree that NMHC is neither responsible nor liable for any claim, loss, or damage resulting from any improper or incorrect use or disclosure of your information.