CHICAGO, IL – It started with numbness on the left side of his face. A few months later, Steve Mores couldn’t feel his tongue or chew on the left side of his mouth. TV commercials featuring food or even being in a grocery store made him nauseous. A long time drummer in a popular band, Mores lost 30 pounds and had to find a replacement. 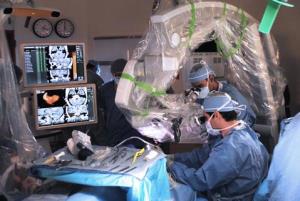 He eventually discovered his issues were caused by a benign, slow growing brain tumor called a vestibular schwannoma. He tried several rounds of radiation to shrink the tumor, but that only made his symptoms worse.

That’s when the Aurora resident turned to Northwestern Medicine neurosurgeon Orin Bloch, MD, who determined that because the tumor was growing, surgery was Mores’ best option. However because of the tumor’s precarious location, the operation to remove the tumor could potentially cause hearing loss or even partial facial paralysis.

Northwestern Medicine neurosurgeons are spearheading new adaptive hybrid surgery technology to help patients like Mores. Participating in a phase 1 research study, Mores was one of the first subjects in the United States to have a brain tumor removed using this technology that integrates a radiosurgery plan into surgery. Planning for follow-up radiosurgery during a brain surgery – or in Mores’ case using his radiation data during surgery – is intended to help doctors more safely remove the right amount of tumor while more accurately balancing the risks of surgery with the risks of radiosurgery toxicity.

“The goal of every brain tumor surgery is to remove as much of the tumor as possible without harming parts of the brain that control vital things such as speech, hearing or movement,” said Andrew Parsa, MD, PhD, the chair of neurological surgery at Northwestern Memorial Hospital and the Michael J. Marchese Professor and chair of the department of neurological surgery at Northwestern University Feinberg School of Medicine and member of the Robert H. Lurie Comprehensive Cancer Center of Northwestern University. “Studying the results of this type of adaptive hybrid treatment could change the way we treat benign and cancerous growths. Instead of using an MRI after a surgery to find out how much of a tumor is left behind, we may be able to get answers and make adjustments in real time during surgery using adaptive hybrid technology.”

Parsa and Bloch performed Mores’ surgery on Oct. 16, 2014. To date, the outcome has been positive with no detectable damage to Mores’ hearing or facial nerve. He was discharged from the hospital less than a week after his surgery.

Vestibular schwannomas, which are also known as acoustic neuromas, are benign and usually slow growing tumors that develop from the nerves supplying the inner ear. As these tumors grow, they press against the balance and hearing nerves, which can cause loss of hearing, ringing in the ear or loss of balance. If the tumor presses against the facial nerve, facial weakness and even paralysis can occur. Pressure on the nerve controlling sensation to the face and head, called the trigeminal nerve, can cause patients like Mores to experience debilitating pain or numbness, Eventually, vestibular schwannomas may grow so large that they press on the brain stem or cerebellum and become life threatening.

“Ideally, adaptive hybrid surgery is meant to be used by performing surgery first, followed by radiation,” said Bloch, who is also a member of the Lurie Cancer Center.  “However, we can also fix less than ideal radiation treatments by doing adaptive hybrid surgery in reverse, using radiation treatment data and overlaying it on the surgical navigation. By using this technique, we were able to remove nearly all of Steve’s tumor and resolve many of his symptoms immediately.”

In fact, Mores recently climbed back onto his drum stool and reunited with his band, Prairie Surfers, A vice president of sales with a team of account reps, Mores is also looking forward to his first business trip in months.

“As soon as I woke up from surgery I could feel the left side of my face,” said Mores, a 57-year-old father of three grown boys. “I’m still recovering but every day, I feel a little better.  Surgery wasn’t the answer I wanted, but after I met the doctors at Northwestern hospital, I was glad they were the ones doing it.”