Innovative clinician and researcher is a leader in cross-disciplinary field

“I truly enjoy the partnership I share with my patients and their families, and I will be working to engage them in a multidisciplinary team-treatment approach,” said Shahabi, who is a professor of gynecology and cancer research at Feinberg. 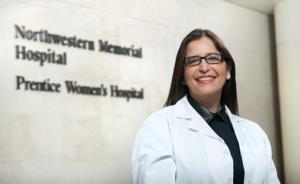 Shahabi, a noted surgeon, researcher, teacher and author, previously worked as system chair of the department of obstetrics, gynecology and reproductive biology at Western Connecticut Health Network’s Danbury and New Milford Hospitals, chair of the Reproductive Tumor Biology Research Laboratory at Danbury Hospital Biomedical Research Institute, and a clinical professor in the Department of Obstetrics and Gynecology at the University of Vermont School of Medicine.

“Dr. Shahabi is an outstanding leader in gynecologic oncology, who puts her patients first.  She is at the forefront of medical and surgical advances in her field, runs innovative clinical research programs and is instrumental in sharing her knowledge and experience with her residents and fellows who will be our future physician leaders,” said Serdar Bulun, MD, chair of the department of obstetrics and gynecology at Northwestern University Feinberg School of Medicine. “Her expertise provides an opportunity to broaden the scope of patient care by putting research findings into clinical practice for personalized therapies.”

Shahabi earned her medical degree and completed a residency in obstetrics and gynecology from the Université Libre de Bruxelles in Belgium, and earned several subspecialty diplomas, including in breast surgery, from the University of Paris V, René Descartes. She completed her residency in obstetrics and gynecology and a postdoctoral research fellowship at the Yale School of Medicine. She then completed a subspecialty fellowship in gynecologic oncology at Albert Einstein College of Medicine.

“Dr. Shahabi is a leader in the field of gynecologic oncology, and will play a key role in our continued growth and expansion,” said Lurie Cancer Center Director, Leonidas Platanias, MD, PhD. “I’m excited to welcome her to Northwestern Medicine, and I would also like to sincerely thank Dr. John Lurain for his interim leadership and his extensive contributions to the Lurie Cancer Center.”