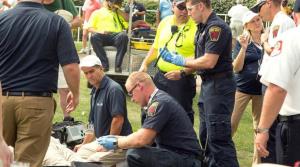 LAKE FOREST, IL –  Northwestern Medicine Lake Forest Hospital physicians and nurses will staff the medical trailer as the healthcare provider on course during the BMW Championship which returns to Conway Farms Golf Club in Lake Forest from Sept. 14 to 20. In addition to staffing the medical tent and providing care to top golfers and thousands of fans, Northwestern Medicine will fund a full college scholarship for Victor Chreptowicz, a Chicago caddy who hopes one day to become a physician.

“We are proud to be there for the best golfers of today at the BMW Championship and also support Victor Chreptowicz – no doubt a future star himself who could be walking the halls of our hospital one day as a physician,” said Thomas J. McAfee, president of Northwestern Medicine Lake Forest Hospital. “Working with the local fire departments in our EMS region and our emergency medicine physicians, nurses and support staff, we will make sure spectators have a safe and enjoyable time and that anyone needing medical attention will receive top care in a timely fashion.”

One of those fans who will be closely watching both the golfers and the supporting medical teams is Chreptowicz, who was a caddy at Bryn Mawr Country Club in Lincolnwood for the past two years. A Chicago resident, Chreptowicz plans to start the pre-med program at the University of Wisconsin – Madison this fall thanks to a full scholarship provided by Lake Forest Hospital.

“I like the idea of being a doctor and helping people,” said Chreptowicz, a Taft High School graduate. “You’re always learning something new, because as a doctor there's always new advancements. I can't thank Northwestern Medicine enough for what they're doing for me. It's changed my life.”

Throughout the week of the BMW Championship tournament, Lake Forest Hospital emergency medicine physicians, nurses and technicians are staffing the medical trailer while working closely with the EMS team, led by the Lake Forest Fire Department, to treat any injuries or conditions that may arise during the tournament.

The Lake Forest Fire Department is coordinating the EMS operations on the golf course and will be supported by EMS personnel from fire departments throughout Lake County. The medics on the course and the Lake Forest Hospital team in the medical trailer will have medications for most common medical emergencies, cardiac issues and traumas. Lake Forest Hospital is also providing the supplies needed for the carts, medical trailer and ambulance. In the event someone needs to be transported to the hospital, there will be a fully stocked ambulance staffed with paramedics on the course at all times.

“Northwestern Medicine will be at the tournament around the clock to support not only these world-class golfers but also the more than 125,000 spectators who are expected to attend,” said Michael Peters, MD, an emergency medicine physician and EMS medical director at Lake Forest Hospital. “Our clinical expertise and close working relationship with the Lake Forest Fire Department will make this a safe and fun event for all.”

Named “Tournament of the Year” by the PGA Tour when it was in Lake Forest two years ago, the BMW Championship is conducted by the Western Golf Association to support the Evans Scholars Foundation – the nation’s largest scholarship program for golf caddies.

The BMW Championship is the penultimate event of the PGA Tour’s Playoffs for the FedEx Cup. The top 30 golfers will compete at the Tour Championship to determine the winner of the FedEx Cup. Founded in 1899 as the Western Open, the Tournament is the second oldest in the United States behind the U.S. Open. NBC and The Golf Channel will broadcast the entire tournament.

Learn more about the BMW Championship.