Two People, One Brain Tumor: After Battling the Disease for More than a Decade, Chicago Couple Vows to Find a Cure Together 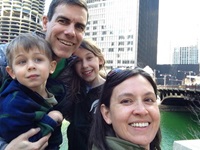 Bill and Viviane Evanoff and their kids Sofia, 10 and Peter, 5.

CHICAGO, IL – In 2001, Bill and Viviane Evanoff vowed to stand by each other through everything life threw at them, in richer and poorer, in sickness and in health.

Less than two years later Bill – then 29 years old – was diagnosed with a brain tumor. In the 12 years that followed, he and Viviane have tackled the brain tumor together, battling the ups and downs of five surgeries, rounds of chemotherapy and weeks of radiation. Despite those challenges, they would not allow the diagnosis to define their life path. They pursued careers, traveled to spend time with friends and relatives, and eventually started their own family that now includes Sofia, 10 years old, and Peter, 5 years old. When they talk about Bill’s journey and treatment it’s always in terms like “we” and “us” even though only Bill is the patient.

“We have seen firsthand the incredible advancements in treatment and care for brain tumor patients at the Northwestern Medicine Brain Tumor Institute,” said Bill Evanoff, a Chicago attorney. “It gives me a lot of hope for the future, and Viviane and I want to do everything we can to help make that future a reality.”

Bill and Viviane Evanoff are the co-chairs of the 2016 Minds Matter gala, which will raise funding for the Northwestern Brain Tumor Institute (NBTI).  This year, the gala will take place during National Brain Tumor Awareness Month on May 20, 2016 at 6 p.m. at the Loews Chicago Hotel, 455 N. Park Drive in Chicago. ABC 7 investigative reporter Jason Knowles will emcee the event that will include a live auction.

“When patients come to the Northwestern Brain Tumor Institute, they see a multi-disciplinary team representing the highest level of clinical medicine, translational research and scientific minds,” said Bill Evanoff’s surgeon and NBTI co-director James P. Chandler, MD, surgical director of neuro-oncology at Northwestern Memorial Hospital and Lavin/Fates Professor of neurological surgery at the Northwestern University Feinberg School of Medicine. “Support for Minds Matter greatly helps this team who are working hard every day to extend the length and quality of life for brain and spinal tumor patients in the long-term and in the short-term providing resources for families to help meet the daily challenges of living with a tumor.”

“Minds Matter is a celebration of survivorship and of improving the quality of life for patients,” said Bill Evanoff’s neuro-oncologist and NBTI co-director Jeffrey Raizer, MD, director of medical neuro-oncology at Northwestern Memorial Hospital and the Lurie Cancer Center, and professor of neurology and hematology/oncology at the Feinberg School of Medicine. “It’s a time to honor the strength and courage of our patients and their families, as well as our scientists, physicians, researchers, nurses, and social workers. It’s a time to look back on how far we’ve come and to plan for the groundbreaking research that we are developing.”

It’s a future Bill and Viviane Evanoff are ready for. Through the years, they have kept meticulous records of Bill’s treatments and appointments, filling up notebooks with questions for doctors and the results of Bill’s progress. By their count, they have been to well over 100 doctor appointments and Bill has received more than 70 MRI scans.

“When we heard ‘brain tumor’ we were shell shocked but it didn’t take long for Bill and me to decide to continue with our lives and deal with the rough patches together,” said Viviane Evanoff. “In a lot of ways, we’ve been lucky. We have close relationships with the best doctors in the country and we’re able to help newly diagnosed patients navigate through the tough first few months.” “A brain tumor diagnosis is initially very frightening and was something I couldn’t control,” Bill Evanoff added. “What I could control was going to an academic medical center that has a strong, smart and compassionate team who is leading the way in research and is dedicated to one day finding a cure for a disease that has affected so many people."