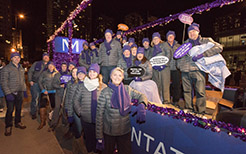 The BMO Harris Magnificent Mile Lights Festival was filled with both lights and life this year, thanks to a special parade float presented by Northwestern Medicine. The float honored patients, donors and families from the Kovler Organ Transplantation Center and Transplant Village Transplant Advisory Council, all grateful for the second chance they and their loved ones have been given through organ transplantation.

In an effort to raise awareness about the Northwestern Medicine Living Donor Kidney and Liver transplant programs and its groundbreaking research efforts, more than 20 transplant recipients, their donors and family members gathered for the parade to ride and walked alongside the NM float.

Transplant Village is an inspired group of organ recipients, donors and their families, whose mission is to support the future of organ transplantation at Northwestern Medicine while connecting and supporting members of the transplant community. The patients, donors and family members who were honored as part of NM’s participation in the Magnificent Mile Lights Festival parade share their inspirational stories below. 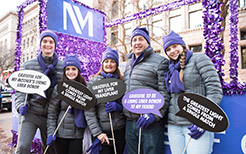 In 2003, at the age of 37, Kristen Ahern was diagnosed with a rare auto-immune disease called Primary Biliary Cirrhosis (PBC). The only cure for this slow-progressing liver condition is a liver transplant. Ahern’s name was added to the transplant list. However, since her condition was not as critical as that of others on the list, doctors informed her that the wait could be years, if not decades.

When her NM doctor of nine years, hepatologist Steven Flamm, MD, suggested that she explore the possibility of a living donor, Ahern decided to host a living donor search party and invited 250 family members and close friends. More than 240 showed up, and so did Dr. Flamm, who carefully explained Ahern’s disease and how the living donor process worked.

Afterwards, 27 individuals stepped forward for testing to be Ahern’s living donor. Tim Phalen, a good friend from college, proved to be the perfect match. On January 2012, nine years after her original diagnosis, Ahern had a successful liver transplant at Northwestern Medicine. Today, both she and Phalen are living healthy and active lives, and Ahern is on a mission to give back through her work with Transplant Village.

“It feels like Christmas every day just because I’m alive, and I want everyone who needs an organ transplant to know what that feels like,” she says. “After receiving the best care at Northwestern Medicine, I knew that I did not want my story to end. I want to provide support for newly diagnosed transplant patients and their donors. I would also like to see the research efforts of these brilliant doctors come to fruition to help better the whole transplant process for future recipients and donors.” 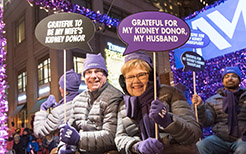 In 1999, Robert Day became one of the first patients at Northwestern Memorial Hospital to donate a kidney laparoscopically. He donated that kidney to his wife, Marilyn. Marilyn and Robert now give back by supporting the Kovler Transplant Center and Transplant Village together.

This year marks 17 years since their surgery, which they celebrate like an anniversary. “Every day, we tell each other how fortunate we are to still be here,” says Marilyn. “We joined the Transplant Advisory Council to advocate for other people undergoing transplants, to help raise awareness and advance research. The research is unbelievable – including investigating ways to make the procedure less invasive and increase organ longevity.”

In addition to donating their time to the Kovler Transplant Center and Transplant Village, Marilyn and Robert have made arrangements in their will for funds to support the NM transplant program. 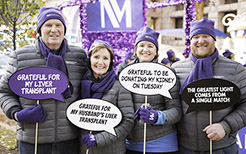 Chicago resident and entrepreneur Dan Dickinson was 59 when doctors discovered that a small lesion on his liver had become cancerous. That was 2009. He was placed on the organ transplant list that same year, and 18 months later, he received a new liver and a second chance at life.

Dickinson was so grateful for his transplant and so inspire by the transplant team at NM that he launched the Transplant Village Advisory Council in 2012, with a board that consists of 30 transplant physicians, surgeons, researchers, patients, donors and family members. “People are dying every day because they can’t get a liver or kidney,” says Dickinson. “As transplant recipients, we have a unique opportunity to give back because many of us would not be here if it weren’t for Northwestern Medicine. That’s our legacy as a patient, to help the next patient so they can in turn help others.”

Dickinson’s daughter, Laurie Dickinson Lee, was also inspired by her father’s transplant experience and joined him in his efforts to establish the Transplant Village. And this year, Lee decided to give back in a profound way by volunteering to become a living kidney donor for a complete stranger. Lee underwent surgery just two days before Thanksgiving. As a result of her altruistic gift, the NM transplant team was able to coordinate a three recipient paired chain with other transplant centers across the country, which means that three lives were saved through Lee’s single donation.

“I’ve wanted to do this – to give back – ever since my father’s transplant,” Lee says. “As healthy people, we are born with extra parts. Yet 22 people die every day because they don’t get the parts they need. Organ donation is a great gift, a beautiful gift, and if everyone would take responsibility, no one who needs an organ transplant would have to die.”

Dickinson and his daughter Laurie Dickinson Lee, who recently became a living kidney donor, were joined at the parade by wife and mom, Nancy, and Laurie’s husband, Robert. 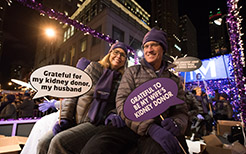 Family has always been the primary focus for Lori and Matt Felber. Their six sons – all of whom Lori educated at home – four daughters-in-law and four grandchildren are central to their lives. When Lori was diagnosed with polycystic kidney disease that resulted in the need for a kidney transplant, the importance of family took on new meaning.

In 2008, right around Lori’s 50th birthday, Matt became his wife’s living kidney donor, and since her transplant, Lori has been able to remain on a low immunosuppression regimen, thanks in large part to research done by Joseph Leventhal, MD, surgical director of Kidney and Pancreas Transplantation. Lori and Matt have now been married for 35 years, and Lori is grateful to Northwestern Medicine and for every day she’s been given. Together, Lori and Matt give back by volunteering their time to support other patients and transplant research through Transplant Village.

“Northwestern has a great team up on the 11th floor,” says Lori. “There are little angels walking around up there. The whole experience has been so positive that we now love encouraging others throughout the pre and post-transplantation process. There is so much to learn and decide, and the whole process can be very intimidating. We want to provide people with information and support to help remove that fear and make the experience as positive as possible.” 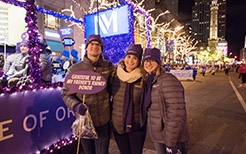 When Josh Goralski learned that his father, Mark, would need a kidney transplant because of complications from Crohn’s disease, Josh knew immediately that he wanted to be his father’s living donor. Josh grew up with his two sisters and their father has been a regular patient at Northwestern Medicine. Mark wasn’t so quick to decide; it took him five months to finally agree. Josh was just 19 and a freshman in college at the time.

“I got this amazing and humble opportunity to give life back to the person who gave me life,” Josh says. “I don’t think people realize how powerful that is. My experience at Northwestern was incredible, and I was back at college a week later. Organ donation is the most beautiful testament of love that I have even seen or been a part of.”

Josh’s sisters, Hannah and Bethany, were so inspired by the care their father and brother received at Northwestern Medicine that they have both found ways to give back. Bethany decided to dedicate her life to nursing and now works as a registered nurse in the Medical Intensive Care Unit at Northwestern Memorial Hospital, and Hannah volunteers her time in support of Transplant Village.

Josh Goralski was joined at the parade by his sisters Hannah and Bethany, who is an MICU nurse at Northwestern Memorial Hospital. 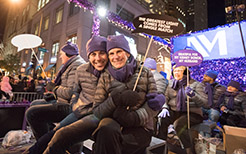 Audrey Mass and her husband, Arnie, began investigating transplantation at Northwestern Memorial Hospital after her husband started dialysis because of declining kidney function. They attended an informational meeting where Audrey asked if she could be a donor for her husband, even though she was 70 years old at the time. Being in good health, physicians approved her for testing, and in 2007, Audrey became Northwestern Medicine’s oldest living organ donor.

Audrey gave her husband four more years with their five children and 11 grandchildren. Arnie died in 2011. Before he passed away, he gave one of their daughters a poem in the form of a letter to give to Audrey after his death. The letter began, “To my angel.”

“It meant the world to him that I could give him life,” Audrey says. “Donating a kidney gave us another good four years together – free of dialysis – so we could travel and spend time with our children and grandchildren. It also gave me an awareness to help others. I never realized the need for living organ donors until I was in that situation. We had such a great experience at Northwestern. If I can do it, anyone can!”

Audrey now donates her time to Transplant Village, helping to raise awareness for organ transplantation and to provide support for other transplant recipients, donors and family members through the Transplant Village Buddy System. “I hope I can be supportive to pre-op and post-op patients and their families,” Audrey says. “I want to let people know that you can be older, not a blood relative and still be a donor if you’re in good health.” 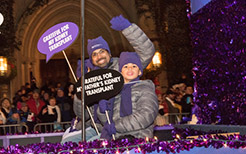 Thomas has been happily married to his wife, Amy, for 11 years, and together they have two children, Sammy and Talia. He also operates his own law firm, Thomas Law. Thomas’ first organ transplant allowed him to enjoy being a kid, to have a relatively normal high school experience, go on to college and meet his wife. His second transplant allowed him to build a life with Amy, become a father and grow his career.

“I am living the dream,” says Thomas. “My wife, my children, my career… none of it would have been possible for me without organ donation and transplantation. I want to give another face to the transplant process and let people know that the gift of live donations doesn’t just affect the recipient. It affects the lives of their families, children, spouses, co-workers and far beyond.”

Thomas will someday need a third transplant, but he knows he can get through it with help from Northwestern Medicine. “I am very appreciative of the transplant team,” he says. “I can’t emphasize enough how great these people are. The social workers, the schedulers, the doctors I’ve worked with, they are all incredible. Even years after the transplant, they feel like family.”

Thomas was joined at the parade by his 8-year-old son, Sammy.