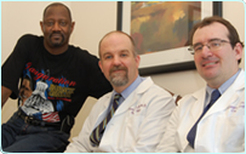 Years ago, Allus Brown, a Marine Corps veteran and avid athlete, was diagnosed with dilated cardiomyopathy, a weakening of the heart that can potentially result in heart and kidney failure. As time passed, he experienced chest pain and shortness of breath. “I kept going to work until one day the chest pain got so bad that my supervisor sent me home,” says Mr. Brown, who is 54. Instead of going home he went to the Bluhm Cardiovascular Institute for treatment. “I knew it was time to look after my health.”

With dilated cardiomyopathy, the ventricles, or the bottom portion of the heart, become weak and enlarged, often for no obvious reason. The impaired ventricles are unable to pump enough blood to meet the body’s needs.

Mr. Brown was evaluated by the advanced heart failure team at Northwestern Memorial Hospital. His heart and kidney failure was confirmed through diagnosis and he was placed on the waiting list for a heart and kidney transplant.

To relieve Mr. Brown’s symptoms and to keep him alive until he received a new heart, a ventricular assist device (VAD), a mechanical device that takes over the pumping action of a diseased heart. “After I received the VAD I felt a lot better and was able to be active again,” recalls Mr. Brown. “I even danced at my daughter’s wedding and had a great time.”

Mr. Brown received his heart transplant and kidney transplant in December of 2009 after extensive coordination by both the heart and kidney nurse transplant coordinator teams. Together, they reviewed the donor offer with the surgeons and patient, arranged for hospital admission and timing of the transplants and communicated with the multidisciplinary teams needed for the surgery. “The nurses were really pulling for me and working hard to take care of me,” says Mr. Brown. “I feel like we have all been through a lot together.”

Today, he looks forward to going back to work and joining the company basketball league after nearly seven years of being unable to play.