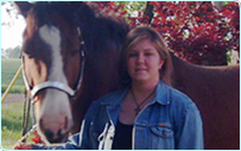 At the age of 22, Anna Reinisch was busy studying to become a veterinary assistant and riding horses in local horse shows near her home in downstate Gillespie, Illinois. But her world started to change in June of 2007. "I got really sick," recalls Ms. Reinisch. "I was experiencing chest pain, arm tingling and shortness of breath. I had no energy and no appetite." A doctor at a local hospital initially diagnosed her with bronchitis. However, after two months and five trips to the hospital, her condition continued to worsen. A chest X-ray revealed an enlarged heart.

"I was transferred to a hospital in Springfield, Illinois, where they told me I had a disease called cardiomyopathy and was in heart failure. I then underwent surgery to receive a pacemaker with a defibrillator," explains Ms. Reinisch. The type of cardiomyopathy Ms. Reinisch was diagnosed with is called noncompaction cardiomyopathy, a rare genetic disorder resulting in cardiac malformation that interferes with normal heart function and eventually leads to heart failure.

The hospital in Springfield recommended that she transfer to the Bluhm Cardiovascular Institute at Northwestern Medicine to receive treatment from the advanced heart failure team.

The advanced heart failure team determined that Ms. Reinisch would need a new heart and listed her as a candidate for a heart transplant. "At first I was absolutely against undergoing heart transplantation," says Ms. Reinisch. "I told my mother and my boyfriend that I couldn't do it. I was scared. But the team at Northwestern eased my worries." Ms. Reinisch received a heart transplant on November 4, 2007, and was able to leave the hospital just 12 days later. "I feel so much better now that I have a heart that works," she says. "This whole experience really made me think about things. After all the help and support I've received I hope I can be a support for other people who need it."