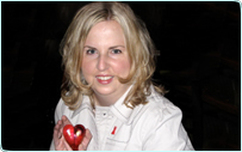 The year was 1975 and Brooke Lannert was born two months prematurely at Prentice Women's Hospital of Northwestern Medicine. Born with two congenital heart defects, Brooke was transferred to Children's Memorial Hospital where she remained for three months after receiving two open heart surgeries. Unfortunately, Brooke's heart problems were not over.

Brooke did everything in her power to stay out of atrial fibrillation. "I was active, did yoga, and even received acupuncture. I once read that going to bed on a full stomach could cause atrial fibrillation so I made sure I didn't eat at least two hours before I went to bed."

Shortly after Thanksgiving 2007, Brooke stayed home from work for a few days with a complaint of a headache, blurred vision and a "euphoric feeling." Although the decision was made to go see her doctor later that day, it was too late. Brooke's husband found her slumped over their bed, unable to talk. Brooke had suffered a stroke. According to the American Heart Association, about 15 percent of strokes occur in people with atrial fibrillation due to blood clot formation in the atria.

Daryl called 911 and Brooke was taken to the closest hospital, where the blood clot in her carotid artery that caused her stroke was removed. "It was my cardiologist at Lake Forest hospital that told me it was time to go see Dr. McCarthy." The stroke and a new diagnosis of heart failure left Brooke weak and unable to undergo surgery right away. Finally in May 2007, Patrick M. McCarthy, MD, cleared Brooke for surgery and performed the classic Maze procedure. Brooke has been free of atrial fibrillation since then.

When asked what advice she has for others in atrial fibrillation, "Don't ever give up—and go see Dr. McCarthy at Northwestern. I tell everyone about him and all the other wonderful people and care I received while at Northwestern Medicine."

With no physical deficits from her stroke other than tiring easily, Brooke remains in a normal heart rhythm and is getting stronger every day. In October of 2008, Brooke and 17 of her friends and family raised $6,000 for the American Heart Association and participated in the American Heart Association Heart Walk. Although Brooke was thrilled to walk one mile during the 2008 Heart Walk, "My goal for the 2009 Heart Walk is to walk all three miles."