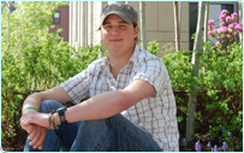 "I was in Kenya, in the middle of nowhere, working on undergraduate wildlife studies when I started to get sick," says Conrad Marshall. "I started waking up in the middle of the night feeling like someone was sitting on my chest. I had trouble breathing and experienced overwhelming fatigue." He was driven eight hours to a hospital in Nairobi where physicians quickly diagnosed 21-year-old Mr. Marshall with idiopathic dilated cardiomyopathy and told him to return home.

Idiopathic dilated cardiomyopathy is a condition in which the heart muscle becomes weakened and enlarged, for no known reason, and cannot pump blood efficiently. Most patients who have cardiomyopathy develop heart failure.

Back home in Grand Rapids, Michigan, Mr. Marshall was evaluated and told he needed a heart transplant, but based on the severity of his condition he might not live long enough to receive one. Mr. Marshall was referred to the Bluhm Cardiovascular Institute at Northwestern Medicine. The advanced heart failure team implanted a ventricular assist device (VAD) in Mr. Marshall and placed him on the waiting list for a heart transplant. A VAD is a mechanical device that takes over the pumping action of a diseased heart to help patients stay alive while waiting for a new heart.

After receiving his VAD, Mr. Marshall returned home to Michigan and kept his mind occupied by reading and learning to play new musical instruments. Then in November of 2009 he got the call to come back to Northwestern Memorial Hospital for his heart transplant. Mr. Marshall's transplant surgery was performed by S. Chris Malaisrie, MD, a cardiac surgeon on the medical staff at Northwestern Memorial and associate professor of Surgery at Northwestern University Feinberg School of Medicine.

Receiving a heart transplant changed more than Mr. Marshall's health. "I have a new appreciation for life and for learning new things," he explains. "I'm really antsy to get back to school. There are so many things I want to do now that I've been given the chance."