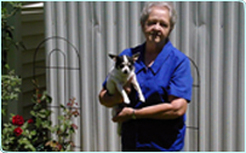 It always hit her in the middle of the night. Dahlia Emerson would wake up suddenly, gasping for air. "I couldn't breathe," she recalls. "My chest hurt like somebody was smashing me. I never knew when it was going to happen." For 10 years, these episodes from a condition called atrial fibrillation would result in a trip to the emergency room. "I'd have to stay in the intensive care unit until they could get it straightened out," she says. "I went to all kinds of doctors, tried several rounds of medication and underwent a procedure called catheter (radiofrequency) ablation several times. Nothing worked."

Atrial fibrillation is a common heart rhythm problem that causes an irregular heartbeat and often results in poor blood flow. It can cause heart palpitations, shortness of breath and fatigue. Individuals who have atrial fibrillation are at increased risk for stroke. Mrs. Emerson said her family doctor also had atrial fibrillation and she took note of his treatment. "Neither medication nor ablation worked for him, so he went to the Bluhm Cardiovascular Institute of Northwestern Medicine to have open-heart surgery and now is atrial fibrillation-free," she says. "I asked my doctor to get me an appointment to see if I could have the same surgery." Mrs. Emerson consulted with the cardiac surgeons at Northwestern Medicine.

Instead of undergoing open-heart surgery, Mrs. Emerson, at the age of 70, underwent the Maze procedure in June of 2007. Physicians place scar lines in very specific places in and around the heart to isolate abnormal electrical signals that cause atrial fibrillation in this procedure.

"I thank the entire Bluhm Cardiovascular Institute team for all the hard work and hours they put in on me," says Mrs. Emerson. A busy homemaker and avid quilter and gardener, she grows butterfly bushes and bougainvilleas. She also does all her own cooking and housework at her home in Jonesboro, Louisiana. "I'm back to doing all the things I love."