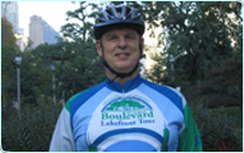 "I needed to do something," recalls Mr. Youngkrantz. "I was overweight with high cholesterol levels and a strong family history for heart attack and stroke."

In December of 2006, Mr. Youngkrantz began his quest to improve his lifestyle with a full medical work-up conducted by his internist, Paul V. Szyperski MD, and cardiologist, James D. Flaherty, MD. "By April of 2007, at the age of 59, I had one heart attack and two percutaneous coronary interventions (PCI or angioplasty) that placed three stents in my narrowed coronary arteries."

In May 2007, Mr. Youngkrantz started cardiac rehabilitation and by November 2007 he was working with a dietitian and exercise physiologist at the Center for Integrative Medicine and Wellness.

"I learned quite a bit about heart health and exercise at cardiac rehabilitation and the one thing that still sticks with me every day is to exercise smart and know your limits. As I have increased my activity since my heart attack, I have consulted with my internist every step of the way," said Mr. Youngkrantz.

"During my first session at the Center for Integrative Medicine and Wellness... my dietary goals were established.... In addition, I decided to visit the exercise physiologist for guidance on what I should be doing in addition to my cardiac rehabilitation workouts. As a result, the exercise physiologist created a weight training program that would fit my schedule and the amount of time I could spend each day."

Fast forward to today and Mr. Youngkrantz has lost 60 pounds and significantly lowered his cholesterol levels by eating a heart-healthy diet and getting plenty of exercise. An avid cross-training athlete, a few of Mr. Youngkrantz's exercise accomplishments include:

"As soon as I finished the 2008 triathlon, I decided I wanted to compete again in 2009," said Mr. Youngkrantz. "My goal for 2009 is to finish in 1:40:00 or less. Of course the folks at cardiac rehabilitation and the Center for Integrative Medicine and Wellness have encouraged me to reach this goal and will guide me all along the way!

In October of 2008, Mr. Youngkrantz was awarded the American Heart Association (AHA) Lifestyle Change Award which recognizes individuals who have made positive changes to improve their quality of life and health. Mr. Youngkrantz received his award on September 26, 2008 at the AHA Heart Walk after being nominated by Rita Szymanski, RN, Clinical Coordinator for Cardiac Rehabilitation at Northwestern Medicine Hospital. "Mr. Youngkrantz has made dramatic strides in decreasing his risk for heart disease by commitment and effort," said Ms. Szymanski.