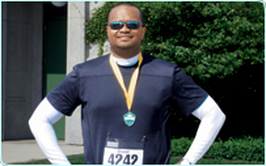 Daniel Hayes was an active runner and in the best shape of his life, having run four marathons in the past four years. He was 38 and training for the 2008 Chicago Marathon when he began to experience a heartburn-like sensation.

“It only happened when I was running and got my heart rate up past a certain point,” he recalls. Concerned, he came to the Bluhm Cardiovascular Institute of Northwestern Medicine where a cardiac catheterization revealed that his left anterior descending coronary artery was 90 percent blocked in two places. The condition could have led to a fatal heart attack.

“Coronary artery disease typically is caused by atherosclerosis, a slow process in which deposits of fat, cholesterol and calcium build up inside the artery,” says interventional cardiologist Charles J. Davidson, MD.

To open up narrowed or blocked arteries, interventional cardiologists perform percutaneous coronary interventions (PCI) and place a stent in the artery to keep it open and restore blood flow. In June of 2008, physicians placed a stent inside Mr. Hayes’ left anterior descending coronary artery. A few weeks later, he received a second stent. Six weeks later, he began cardiac rehabilitation. Today, Mr. Hayes continues with his cardiac rehabilitation and works out at the gym. He wants to return to marathon running when he can, but is thrilled to have just completed the Soldier Field 10-mile run.

“I wasn’t always this active,” he says. “Eight years ago, I made a commitment to exercise, eat right and get in shape. I made dramatic lifestyle changes because I wanted to feel better about my physical appearance.

“As it turns out, if I hadn’t started exercising and losing weight, as well as seeing the physicians at the Bluhm Cardiovascular Institute, I probably would have suffered a heart attack. Changing my mindset and involving experienced physicians in my life helped me make a complete turnaround. I feel like I’ve gotten my life back.”