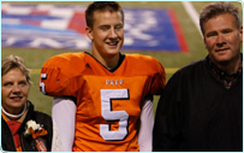 Edward Haynor lives in Erie, Pennsylvania and owns his own business. Twenty years ago, Mr. Haynor had his first episode of atrial fibrillation. "I knew something was wrong right away. At first, my atrial fibrillation was intermittent, which was bad enough; but over time, it became constant. My atrial fibrillation was so debilitating that it was hard to take an active role in my family life and go to work." Mr. Haynor's symptoms included feeling lightheaded, short of breath and fatigued with a terrible pressure in his neck and head.

After medical management and four radiofrequency ablation procedures failed, Mr. Haynor asked his cardiologist from the University of Pennsylvania Medical Center what he should do next. "My cardiologist told me that there was only one place for me to go - go see Patrick M. McCarthy, MD, at the Bluhm Cardiovascular Institute of Northwestern Medicine." I met with Dr. McCarthy and we agreed that I needed to undergo the Maze procedure.

"I only have good things to say about the people and the care I received while at the Bluhm Cardiovascular Institute. Everyone was very professional and courteous. Three days after surgery I was ready to go home, so my friend picked me up in his airplane and flew me back home to Erie! Two weeks after surgery, I returned to my business part-time."

One month after Mr. Haynor underwent the Maze procedure at the Bluhm Cardiovascular Institute, he experienced an arrhythmia (irregular heartbeat) that was new to him - atrial tachycardia. "The good news is that I was cardioverted once and have been in a normal sinus rhythms ever since."

"What people do not understand is that atrial fibrillation drains you physically 24 hours a day, seven days a week. I could do nothing prior to surgery," says Mr. Haynor. "Since my surgery I feel great and because I can once again exercise, I have lost 50 pounds."