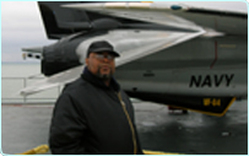 When Edward Richardson started experiencing chest pain and shortness of breath in 2008, he was concerned. “I knew something was wrong,” he says. “But when I was diagnosed with coronary artery disease and I realized I was facing surgery, it kind of threw me for a loop.”

Individuals who have coronary artery disease can experience decreased blood flow to the heart because of narrowing and blockages in the artery walls. The condition can lead to a fatal heart attack. Mr. Richardson, 51, sought treatment at the Bluhm Cardiovascular Institute of Northwestern Medicine.

His physicians told him he needed coronary artery bypass graft surgery, or CABG. In this procedure, surgeons remove a portion of a blood vessel from another area of the body, such as the chest wall, an arm or leg, and attach it to a diseased artery to "bypass" the blockage.

Mr. Richardson knew the surgery was needed, but he wasn’t eager to undergo the procedure. “There was a lot of anxiety,” he says. “I had trouble sleeping because I couldn’t stop thinking about my chest being opened for the surgery.”

As part of a unique program at Northwestern Medicine, Mr. Richardson underwent a psychological evaluation and received training in breathing and relaxation exercises under the guidance of Kim L. Feingold, PhD, founder and director of Cardiac Behavioral Medicine at the Bluhm Cardiovascular Institute.

“Kim helped me to deal with my stress about the upcoming surgery,” says Mr. Richardson. “The coping exercises she taught me were so valuable. They helped me let go of my anxieties and put myself in the hands of the surgeon.”

On August 18, 2008, Mr. Richardson underwent CABG surgery. Mr. Richardson’s recovery went smoothly and he began cardiac rehabilitation a few weeks later. “I felt like I got a fresh start,” he says, “I was able to stay on the treadmill for 40 minutes without really taxing myself.”

Mr. Richardson, a stage manager and technical set designer for an arts foundation in Chicago, believes that stress played a significant role in the development of his coronary artery disease.

“I started eating a heart-healthy diet and quit smoking several years ago, but I’m going to need to keep my stress level down if I’m going to stay healthy,” he says. “It’s fortunate that the relaxation exercises I learned continue to help me. Especially now that I’m back at work, deadlines fall and things get stressful. But I don’t let things stress me out because I’ve been there and seen what it has done to me. Instead I take time out and just look up and laugh.”