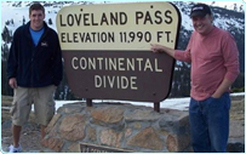 Gene Chapoton, a 56-year-old machine repairman, was diagnosed with familial cardiomyopathy when he was 44 years old. "Cardiomyopathy runs in my father's side of the family," he says. "I had two uncles who died in their early 50s as a result."

Familial cardiomyopathy is a genetic disorder that causes heart muscle to thin and weaken, interfering with normal heart function, and eventually leading to heart failure. "My first symptom was fatigue," he explains. "My physician started me on medication to slow down the progression of the disease. It continued to where I couldn't even raise my hand over my head to change a light bulb."

After many years of medications and two different biventricular pacemakers to help his heart function and ease symptoms, he went into heart failure in March of 2006. "They put me on the heart transplant list," says Mr. Chapoton. "We always knew it was only a matter of time."

He received his new heart in September of 2006. "The hardest part was getting to the point where I needed the transplant," he says. "The actual heart transplant and the recovery were really smooth. I remember looking out at Lake Michigan from the 18th floor of Northwestern Memorial Hospital and realizing I had my whole life ahead of me again. It was a pretty great thing."

Mr. Chapoton went back to work the following April and recently went skiing for the first time in five years. He enjoys boating and fishing where he lives on Lake St. Claire in Michigan, but he still comes back to Northwestern Memorial for all of his checkups. "For what they've done for me, a 300-mile drive is nothing," he says.