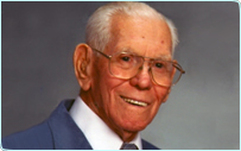 When 91-year-old Irvin Lafferty was diagnosed with severe blockage of his heart valve, open-heart surgery was out of the question. He'd already survived quadruple bypass while in his 50s, and having lived almost a century, Lafferty was not a good candidate for heart surgery for many reasons. His local cardiologist referred him to surgical and interventional specialists at the Bluhm Cardiovascular Institute at Northwestern Medicine. And, on January 21, 2009, Lafferty became the first patient in Illinois to receive a prosthetic heart valve through a procedure known as transapical transcatheter aortic valve implantation, which combines catheterization technology and traditional surgery, allowing doctors to implant a new heart valve in place of Lafferty's diseased valve while his heart remained beating.

"Traditional open-heart surgery is a very safe and effective way to replace diseased heart valves, but for many patients open-heart surgery is not a viable option," says Patrick M. McCarthy, MD, Northwestern Memorial's chief of the  Division of Cardiac Surgery at Northwestern Memorial Hospital, executive director of the Bluhm Cardiovascular Institute and the Heller-Sacks Professor of Surgery at the Northwestern University Feinberg School of Medicine. "By utilizing the percutaneous technique—meaning surgery is not required—we are able to greatly reduce risk for these patients. We see percutaneous valve repair as not only having a great impact upon how high-risk patients are treated, but in how heart valve disease is treated period, in the U.S. and around the world."

McCarthy was the co-principal investigator for the clinical trial that provided Lafferty's new heart valve, which is formally referred to as the Placement of AoRtic TraNscathetER Valve, or PARTNER. The Bluhm Cardiovascular Institute was among the trial's pioneering sites. McCarthy says the procedure builds upon a routine catheter-based procedure, the balloon aortic valvuloplasty.

"Balloon aortic valvuloplasty has been traditionally offered as a palliative therapy for patients who were not candidates for aortic valve surgery," said the hospital's director of the Cardiac Catheterization Laboratory, Charles J. Davidson, MD, interventional cardiologist on the medical staff at Northwestern Memorial, medical director of the Bluhm Cardiovascular Institute and professor of Medicine at Northwestern University Feinberg School of Medicine.

"This particular technique is a more durable treatment than balloon valvuloplasty and is potentially a breakthrough for treating high-risk patients."

Medical specialists estimate every year nearly 200,000 people in the U.S. need new heart valves. Yet over half do not receive them primarily due to frailty, one of the most common reasons for exclusion from traditional open-heart surgery.

"Surgery becomes far too risky when patients are conditionally weak or frail," says S. Chris Malaisrie MD, cardiac surgeon on the medical staff at Northwestern Memorial and associate professor of Surgery at Northwestern University Feinberg School of Medicine. "The goal is to replace the diseased valve at minimal risk to these patients—many of whom have very limited therapeutic options. Aortic valve replacement is one of few therapies offering both symptomatic relief and improved long-term survival."

During insertion, the artificial valve remains collapsed until it reaches its destination. It is then expanded and released in place of diseased aortic heart valves. The prosthesis is made of stainless steel and biological leaflets that help direct the flow of blood in the heart. It is permanent and integrates an expandable stent that holds the valve in its intended position. Northwestern Memorial utilizes both the transfemoral (through the groin) and transapical (through the ribs) approaches. Implantation occurs in a hybrid operating room suite that incorporates elements of both a traditional operating room and cardiac catheterization laboratory.

Dr. McCarthy, the principal investigator for this study, is a consultant for Edwards Lifesciences (for valve repair, not the study device used in the PARTNER trial), the manufacturer of the investigational valve. In addition, Dr. McCarthy receives royalties from three annuloplasty rings developed with Edwards (Edwards MC3 annuloplasty system, dETlogix annuloplasty ring, and the Carpentier-McCarthy-Adams IMR ETlogix Annuloplasty Ring with holder).