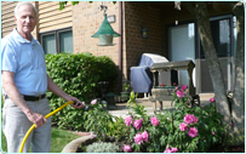 James Danauskas underwent bypass surgery at another hospital on the popliteal arteries in both his legs in the late 1990s. He was suffering from peripheral artery disease (PAD), a condition that occurs when fatty deposits build up in the inner linings of the artery walls in the legs or arms. This process causes narrowing or blockages that restrict blood circulation to the limbs. To restore normal blood flow, vascular surgeons perform surgical bypass, angioplasty and stenting.

Unfortunately, his original bypass surgery failed and over the next decade he underwent numerous additional surgeries, including a repeat bypass, removal of several aneurysms in his legs and multiple procedures to drain fluid from infections. “I was seeing a physician assistant for wound care because after all these surgeries I ended up with a non-healing infected wound in my right leg,” says Mr. Danauskas, who is 73. “One day my surgeon told me I needed more help than he could provide. He made me an appointment with Dr. Rodriguez and told me this was the surgeon who could help me."

In March of 2010, Dr. Rodriguez performed surgery to remove dead and infected tissue in Mr. Danauskas’ right leg. He also removed an infected prosthetic bypass graft that was implanted in Mr. Danauskas’ leg during a previous surgery. Mr. Danauskas was up and walking around the day following surgery. “I’ve had no swelling and I’m off pain medication,” he says. “It’s amazing I can still walk and be active after all that I’ve been through. Dr. Rodriguez is a wonderful guy. Everyone involved in my care at Northwestern Memorial was excellent.”