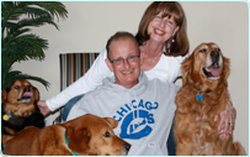 Any vascular surgeon will tell you that surviving a ruptured thoracic aortic dissection is pretty extraordinary. For Jeffrey Guenther and his wife, survival initially didn’t seem likely.

It all began when Mr. Guenther, 56, was getting ready to walk his dog late on a Monday evening in October of 2010. Struck by horrendous chest and back pain, he felt like he “was becoming unzipped,” Mr. Guenther says, and asked his wife, Sharon, to call 911. When the paramedics arrived at his home in the far western suburbs of Chicago, they administered heavy pain medication, stabilized him and rushed him to the nearest hospital.

That’s when his wife got the bad news. A CT angiogram showed that Mr. Guenther had suffered a dissection or tear in the wall of his thoracic aorta. The thoracic aorta can be thought of as a big hose (shaped like a candy cane) that arises from and carries oxygenated blood away from the heart to the body. In Mr. Guenther’s case, the dissection had ruptured, causing a life-threatening emergency – the blood in his aorta was no longer contained within the aorta and instead, was spilling into his chest.

The doctors said “that Jeff had about a 1 percent chance of making it,” and started asking about a living will, Mrs. Guenther says. Then more bad news: the hospital could not do the surgery to repair the aorta. At this point, Mrs. Guenther began hoping they could transfer him to Northwestern Memorial Hospital. “I work downtown and I have a lot of colleagues who go there,” she says. “I had always heard glowing reports.” Soon enough, the doctor returned with just the news she was waiting for. Northwestern would accept Mr. Guenther as a patient and perform the surgery.

Once they arrived at Northwestern, “everything started coming together,” Mrs. Guenther says, “and I didn’t even think about Jeff dying.” Within 20 minutes, Mr. Guenther had been prepped for surgery and taken to the operating room. There, the Bluhm Cardiovascular Institute surgeons that operate on the thoracic aorta were able to repair the ruptured aorta by placing a stent-graft tube into the thoracic aorta, where it acts as a “cast” that lines the aorta from the inside.

After the initial surgery, Mrs. Guenther was told by the surgical team that all were cautiously optimistic of a successful recovery, and that her husband would need another surgery in a few hours to address problems in his left leg caused by the dissection of his aorta. In the second surgery, a stent was placed in Mr. Guenther’s blocked iliac artery, a blood clot was removed and a four compartment fasciotomies was performed to relieve pressure in his leg.

The second operation also was a success. Her husband was doing well. In fact, he had already moved his toes and opened his eyes.

Still, recovery wasn’t easy. Mr. Guenther was in the hospital for two weeks and worked hard to regain his strength. The upbeat, positive attitude of the Northwestern staff—from the ICU nurses who took Mrs. Guenther’s calls at three in the morning to the patient escorts who transported Mr. Guenther to and from his tests—made an unhappy chapter in his life “as pleasant as it could be,” he says.

He followed up with his surgeon two weeks after he left the hospital and started physical therapy a few weeks later. Since then, he has returned to his job as a sales and marketing manager for an electronics packaging company, is exercising at his health club and is back to tending to the fruit trees and vegetable garden in his back yard.

While the Guenthers would never want to relive the harrowing event, they agree the experience had its positive side. “I don’t get upset about the small stuff anymore,” Mr. Guenther says. “Going through something like this changes your perspective on what really is important in life.”