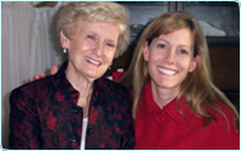 "I shopped around and had many physicians look at my test results, but all the signs kept pointing back to Dr. McCarthy doing the surgery," stated Laura. Patrick M. McCarthy, MD, not only performed Laura's surgery, he also performed Joanne's. "Laura and I were blessed to find our way to the Bluhm Cardiovascular Institute and to Dr. McCarthy," stated Joanne.