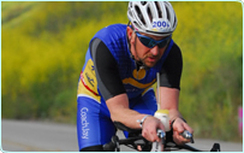 As a professional triathlon coach and elite triathlete, John "Jay" Marschall made endurance sports his life. So when his doctor said he had to stop exercising at the age of 46 because of the condition of his left ventricle and the intensity of his workouts, he didn't think that was an option. "I was young and still competing in triathlons at a high level," says Mr. Marschall. "I decided to do some research and find a better solution."

He had been diagnosed eight years earlier with bicuspid aortic valve, a congenital abnormality in which the valve has two cusps instead of three. Individuals who have this condition are predisposed to developing leaking and stenosis (narrowing) of the valve. Years of monitoring Mr. Marschall's heart through echocardiograms showed that his aortic valve was leaking and his left ventricle was enlarged. He had experienced several syncopal episodes over the years, which can include a sudden loss of consciousness.

After corresponding with Dr. Bonow via e-mail and over the phone, Mr. Marschall flew from his home in Billings, Montana to Chicago to discuss the situation. Six days later, he returned home with a new heart valve. "I was just planning on talking with them to see if they could help me," recalls Mr. Marschall. "After I met with Dr. Bonow, he got me right in to see Dr. McCarthy. I underwent minimally invasive surgery to replace my aortic valve the next day." That was in January of 2008. Twelve weeks later, Mr. Marschall completed a half Ironman, which entails a 1.2-mile swim, 56-mile bike ride and 13-mile run.

"It's pretty amazing," says Mr. Marschall. "I'm glad that I did my research and had this surgery. I raced for 20 years with my old valve. Now I'm motivated to see what I can accomplish with my new valve."