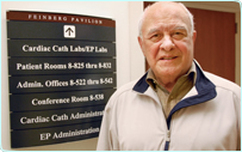 Jorge Galdamez had always led an active life. Even at the age of 74, he was busy counseling growing businesses, playing golf and exercising as part of his routine.

Then one night he woke with what he thought was a severe case of heartburn, but realized it might be something else. Even so, he was surprised to find himself being evaluated for heart problems in Northwestern Medicine’s Emergency Department.

“I had never had the slightest bother in my body,” says Mr. Galdamez.

While in the Emergency Department, Mr. Galdamez was put through a battery of tests to check for potential heart problems. There were no suspicious readings from an ECG, chest X-ray or blood work administered by a medical team led by James D. Flaherty, MD, interventional cardiologist on the medical staff at Northwestern Medicine and associate professor of Medicine at Northwestern University Feinberg School of Medicine.

But Dr. Flaherty remained skeptical that Mr. Galdamez was having a heart attack and recommended that he have a cardiac catheterization, a test to evaluate blood flow in the coronary arteries.

The next thing Mr. Galdamez says he remembers was waking up and being told that the cardiac catheterization showed that one of his coronary arteries was 100 percent blocked. Coronary arteries supply blood to the heart and when plaque builds up in their walls, blood flow becomes obstructed, reducing the heart’s supply of oxygen. A heart attack can occur when the obstruction reaches a critical point. Dr. Flaherty performed a percutaneous coronary intervention (PCI), placing a stent in the artery to keep it open and restore blood flow. Another coronary artery also was partially blocked, but not significantly enough to require the procedure.

“I stayed in the hospital for three days,” says Mr. Galdamez. “I didn’t feel anything during the procedure or after. There was no discomfort, no pain.”

Since then, Mr. Galdamez has ramped up his exercise routine, first as part of the Northwestern Medicine Cardiac Rehabilitation program and now in the gym of his condo building. Now that he is doing better, he says he looks forward to spending more time on the golf course than at his physician appointments.