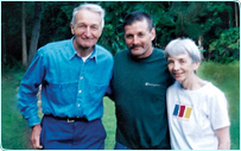 In October of 1994, Lawrence Desjarlais was happily living with his wife and working for his sons as a commercial carpenter in Hawaii. His diagnosis of atrial fibrillation came after he almost passed out while driving. "I felt funny and then it was like the power was slowly going out in the power plant. I had to pull the car over; I really thought I was going to pass out!"

In February of 2005, Mr. Desjarlais came across an article in the Wall Street Journal about Patrick M. McCarthy, MD, and the Maze procedure that he was performing. "I kept that article for two years until I finally picked up the phone and called the Bluhm Cardiovascular Institute of Northwestern Medicine. I had to do something; I could barely push an empty grocery cart."

"Dr. McCarthy and Jane Kruse have both greatly improved our lives. I cannot say enough about Jane and the follow-up care she has provided to us," stated Mrs. Desjarlais. "She is so sharp." Jane Kruse RN, atrial fibrillation nurse coordinator, coordinates care for patients having procedures to treat atrial fibrillation in the inpatient and outpatient settings at the Bluhm Cardiovascular Institute. Jane has worked with cardiac arrhythmia patients for over 25 years.

Mr. Desjarlais, currently living in Livonia, Michigan, is an early riser. "At 76 years old, I get up at around 4:30 a.m. and walk between four to eight miles every day. My wife has even started to join me on the four-mile walks."