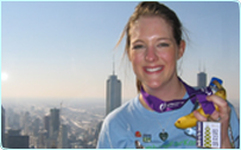 When Melissa Simon was 14 years old, she was diagnosed with viral cardiomyopathy, a condition in which the heart becomes weakened and enlarged and cannot pump blood efficiently. “An unknown virus landed on my heart, and my immune system attacked my heart in the process of killing off that virus,” explains Mrs. Simon, now 29.

Decreased heart function resulting from viral cardiomyopathy can lead to heart failure. Once her physician stabilized her condition, Mrs. Simon was able to manage her symptoms with medication. “Fortunately, I learned to compensate for my decreased heart function and actually led a relatively normal life for many years,” she says.

Thirteen years later, an echocardiogram at Mrs. Simon’s routine appointment at the Bluhm Cardiovascular Institute at Northwestern Medicine showed that one of her heart valves was leaking, which can be a sign of heart failure. In April 2007, Patrick M. McCarthy, MD, chief of Cardiothoracic Surgery at Northwestern Memorial Hospital, executive director of the Bluhm Cardiovascular Institute and Heller-Sacks Professor of Surgery at Northwestern University Feinberg School of Medicine, successfully repaired her leaky heart valve.

However, Mrs. Simon’s heart muscle wasn’t pumping enough blood to sustain any type of strenuous activity. Her condition worsened and she soon learned that she needed a heart transplant. “I went downhill fast,” says Mrs. Simon. “It quickly got to the point where all I could do was lie there in the hospital bed. Every day was a struggle to survive until the next day.”

Mrs. Simon received a new heart on June 6, 2007. A week later, and a few days before Mrs. Simon turned 27, she was released from the hospital. “Everyone at Northwestern Memorial was so upbeat and positive,” says Mrs. Simon. “They had not a doubt in their minds that this would work out for me. They said I would get a new heart and that’s exactly what happened.”

Mrs. Simon went back to her job as a marketing manager about two months after her transplant. She began cardiac rehabilitation in October 2007. Today she is doing well and says she is grateful to the family of the organ donor whose heart saved her life.

“I assumed I’d always have a weak heart,” says Mrs. Simon. “But now I can exercise and do all the things I want to do, even have children. This new heart has given me a life I never imagined possible.”