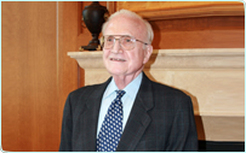 When Milton Kayle, a former special assistant in the White House Office for President Harry S. Truman's cabinet, found out that he had an abdominal aortic aneurysm, his doctor in New Rochelle, New York, explained that there was no need to operate unless the aneurysm got too big. Five years later, an ultrasound showed that the aneurysm had grown considerably and it was time to take further action. "A relative on the medical staff at Northwestern Memorial Hospital told me that there was only one vascular surgeon in the country who I should let operate on me," explains Mr. Kayle. He drove to Chicago to see William H. Pearce, MD, vascular surgeon at Northwestern Memorial, and professor of Vascular Surgery at Northwestern University Feinberg School of Medicine.

An aneurysm is a swelling or weakened area in a blood vessel. It develops slowly and typically does not cause any symptoms. However, as an aneurysm grows the chance that it will rupture increases. In July of 2003, Dr. Pearce performed a successful open abdominal aortic aneurysm repair on Mr. Kayle. "I had a wonderful experience at Northwestern Memorial," says Mr. Kayle, age 85. "I can't sing praises high enough about Dr. Pearce, his team and the nurses."

Recently, Mr. Kayle and his wife moved to Glenview, Illinois, to be closer to their children and grandchildren. Not long after the move, Mr. Kayle found out that he has a thoracic aortic aneurysm with a dissection, a condition in which part of the aorta wall widens and layers of the aorta pull apart. Thoracic aortic aneurysms require close monitoring, as the aneurysms usually have no symptoms until the aneurysm begins to leak or expand. Dissection or rupture of the aneurysms represents a life-threatening emergency due to severe internal bleeding. Dr. Pearce is closely monitoring Mr. Kayle's condition with Mark K. Eskandari, MD, chief of Vascular Surgery at Northwestern Memorial, associate director of the Bluhm Cardiovascular Institute and the James S. T. Yao, MD, PhD, Professor of Education in Vascular Surgery at Northwestern University Feinberg School of Medicine.

"They recommended against surgery and are managing me with medication to keep my blood pressure at the right level," says Mr. Kayle. In May of 2008, a CT scan showed his aneurysm to be stable. Mr. Kayle is on the board of the Harry S. Truman Library in Independence, Missouri, and belongs to an organization of former presidential speech writers called the Judson Welliver Society. "We go to Kansas City for the annual library fundraiser, annual board meeting and half-yearly board meeting," says Mr. Kayle. "This all keeps me happy as long as I still can function, which I can, thanks to my excellent doctors at Northwestern Memorial."