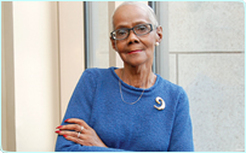 Various medical conditions have caused Muriel Davis, 64, to spend a great deal of time in physician offices, emergency rooms and hospitals. A retired administrative assistant, she was diagnosed with lupus, a chronic, inflammatory autoimmune disorder, in the late 1990s. Several years later, in 2008, she began suffering from gastrointestinal issues related to the lupus and struggled to keep her weight from falling too low.

“I was experiencing a lot of acid reflux and it was difficult for me to swallow,” says Ms. Davis, who at her healthiest weighs little more than 100 pounds. “I didn’t have a very good appetite.”

Ms. Davis sought treatment from John E. Pandolfino, MD, a gastroenterologist on the medical staff at Northwestern Memorial Hospital and associate professor of Medicine at Northwestern University Feinberg School of Medicine. He found that her esophagus had collapsed and started her on drug therapy. But the medications proved to be of little help and her symptoms became so severe that she was admitted to Northwestern Memorial. More testing revealed a condition unrelated to her lupus, a thoracic aortic aneurysm, which is a bulging of part of the wall of the aorta, the body’s main artery. Her aorta was compressing her esophagus against her diaphragm’s muscle and tendon, making it difficult for food to pass into her stomach.

Dr. Pandolfino consulted the vascular surgeons of the Bluhm Cardiovascular Institute that operate on thoracic aortic aneurysms. Aneurysms continue to grow until they burst, which is what makes the condition so dangerous. It was determined that the aneurysm was 4.3 centimeters at the time of diagnosis and initially sought conservative options. But when the aneurysm grew, he recommended surgery to prevent a life-threatening rupture.

Before Ms. Davis could tolerate surgery, her nutritional status had to be addressed. With the help of a feeding tube, she gained enough weight to have the surgery in September of 2010. During the complex surgery, the surgeons fixed the aneurysm, which had grown to a dangerous size of nearly 6 centimeters.

The diseased aorta was replaced from the mid-chest to the pelvis with a synthetic, tubular graft. Ms. Davis spent less than three weeks in the hospital before moving to a rehabilitation facility for further recovery. Eventually, she was able to go home without the feeding tube. Since that time, she has gained 10 pounds.

Thanks to the surgery, Ms. Davis is enjoying a more active lifestyle. For that, she’s thankful.

“The care that I've received has been marvelous,” she says. “The entire team at Northwestern Memorial has been very concerned about my health and well-being and supportive of all my needs.”