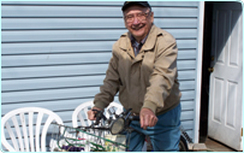 At 87, Nicholas Maruszczak of Hammond, Indiana, says he has worked hard his entire life. When he was diagnosed with an abdominal aortic aneurysm in 2003, he didn’t want to slow down. “I was still strong enough to help lift the washers and dryers that I repair,” says Mr. Maruszczak. “So the aneurysm didn’t seem like that big of a deal. But about five years later, I started having pain.”

In November 2008, his doctor advised him to seek immediate treatment and recommended the Bluhm Cardiovascular Institute at Northwestern Medicine. “My kids went with me to Chicago,” says Mr. Maruszczak. “I had surgery within 24 hours of arriving.”

An aneurysm is a swelling or weakened area in a blood vessel. Commonly occurring in the abdominal aorta, aneurysms frequently appear without symptoms. Surgery is performed to prevent a rupture of the aneurysm, which can be fatal.

Dr. Eskandari used a stent graft to bypass the aneurysm, cutting off its blood supply to prevent it from swelling further. The stent allowed the abdominal aorta to remain open for blood flow.

“I was shocked when they told me I had to have surgery right away,” says Mr. Maruszczak. “But I also was relieved that I would have this taken care of. I didn't worry about a thing.”

After a six-day hospital stay, Mr. Maruszczak was discharged. Today, he’s back to doing the things he enjoys, including riding his bicycle every day and working at his son Doug’s appliance store, a business his family credits him with inspiring.

“For 36 years, I worked at a big soap plant, but I also had my own appliance repair business on the side to provide for our eight children,” says Mr. Maruszczak. “So I've been repairing washers and dryers for about 60 years. You've got to keep moving. Most people my age have all kinds of complaints. I’m so thankful for my health.”