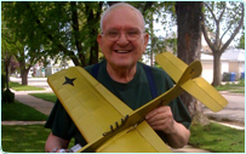 Richard Schmidt, a 77-year-old retired salesman, began experiencing chest pain that wouldn’t go away in July 2008. He made an appointment to see his doctor at Northwestern Memorial Hospital.

An echocardiogram, a stress test and an angiogram revealed that he would need triple bypass surgery or coronary artery bypass surgery (CABG) plus another surgical procedure afterward, an abdominal aortic aneurysm repair.

“Triple bypass surgery is a pretty major procedure, and I wasn’t sure how I would be feeling afterward,” Mr. Schmidt says. “So I wasn’t sure how well I would do with the next surgery, the aneurysm repair. My wife, Anna, and I were relieved when we found out that they could do it with just a small surgical incision.”

An aneurysm, a swollen or weakened area of a blood vessel, can affect arteries almost anywhere in the body. Aneurysms are at risk of bursting, which can be fatal. In Mr. Schmidt’s case, surgeons at Northwestern Memorial were able to repair the aneurysm with minimally invasive endovascular stent grafting.

In this procedure, a catheter is inserted into a tiny incision in the groin. The catheter is threaded through the artery to the aneurysm, where a stent graft is placed to close off the aneurysm from blood flow and prevent further swelling.

“My experience at Northwestern Medicine was an 11 on a scale of 1 to 10,” says Mr. Schmidt. “Everybody took care of me and tried to make my stay pleasant.”

Eight months after the surgery, a CT scan showed that the aneurysm had shrunk from the size of a grapefruit down to 5 cm. “I’ll go back in a year for another CT scan,” says Mr. Schmidt. “But everything looks good. I’ve finished cardiac rehab. I’m feeling great and spending lots of time with my family.”

Mr. Schmidt has four children and five grandchildren who live near his home in Harwood Heights, Illinois. “There’s always something cooking: a soccer game, a school chorus performance, a ballet recital, you name it,” says Mr. Schmidt. “Really, my grandchildren are doing more exciting things than I ever did!”