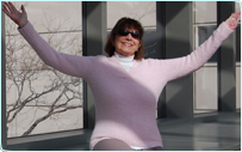 Rita Sterling was an active 62-year-old when she had her first stroke. When she suffered a second stroke later that year, she was diagnosed with a patent foramen ovale (PFO) by Charles J. Davidson, MD, interventional cardiologist on the medical staff at Northwestern Medicine, medical director of the Bluhm Cardiovascular Institute and professor of Medicine at Northwestern University Feinberg School of Medicine.

A PFO is an incomplete closure of the wall between the two upper chambers of the heart, through which blood can flow in either direction. Dr. Davidson used a minimally invasive approach through the skin (percutaneously) to close Ms. Sterling’s PFO.

“After my third stroke I was diagnosed with atrial fibrillation,” says Ms. Sterling. “The diagnosis was a real surprise because I wasn’t experiencing any symptoms.” Atrial fibrillation is defined as chaotic or abnormal electrical signals or pathways in the atria or upper chambers of the heart, resulting in an irregular heartbeat that prevents the atria from contracting or squeezing normally. Instead, the atria quiver, decreasing the amount of blood ejected from the heart with each heartbeat. Individuals with atrial fibrillation are at increased risk for stroke, heart attack and heart failure.

Ms. Sterling was referred to the Bluhm Cardiovascular Institute’s Program for Atrial Fibrillation where her care was coordinated through a multidisciplinary team approach. She consulted a cardiac electrophysiologist, cardiac surgeon and Jane Kruse, RN, atrial fibrillation nurse coordinator. Ms. Sterling was reluctant to undergo surgery and began taking medication to reduce her risk of stroke and protect against a dangerously high irregular heart rate.

After experiencing frequent episodes of atrial fibrillation and ongoing discussion with the multidisciplinary team, Ms. Sterling decided to undergo surgery. “Although I still wasn’t having any symptoms from the atrial fibrillation, I was anxious and living in fear of having another stroke.”

In September of 2009, on the advice of her Bluhm Cardiovascular Institute clinical team, Ms. Sterling underwent a Maze procedure. Today, Ms. Sterling has a normal heart rhythm. “It is a big relief not to be worried about having another stroke,” she says. “Without this surgery I would have been on medication for the rest of my life. I’m so thrilled to be medication-free.“