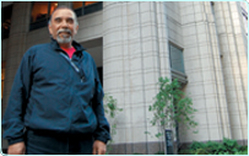 Four years ago, when Robert Castillo was 60, he underwent successful quadruple coronary artery bypass surgery at Northwestern Memorial Hospital. It was at this time that he also was diagnosed with an abdominal aortic aneurysm that needed to be monitored.

An aneurysm is a widening or bulging of part of the wall of the aorta, commonly occurring in the abdominal area. A ruptured aneurysm can be life-threatening. “Having heart surgery and discovering the aneurysm was a stroke of luck and probably saved my life,” Mr. Castillo now says.

Every six months after heart surgery, Mr. Castillo continued to see vascular surgeon Mark K. Eskandari, MD, at the Bluhm Cardiovascular Institute’s Center for Vascular Disease. Dr. Eskandari continued to monitor his condition to determine if and when intervention was necessary. “This year when I went to have the aneurysm checked, Dr. Eskandari found it had grown to the point where it was time to do something about it,” Mr. Castillo says.

Twenty-four hours after Mr. Castillo’s endovascular stent graft repair, he was able to go home. “Everyone was so professional and so helpful,” says Mr. Castillo. “They really focused on making sure I was comfortable with the procedure and understood why it needed to be done. They took great care of me.”