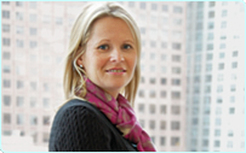 Stefanie Bader was born with a bicuspid aortic valve and aortic stenosis and had her first heart surgery at age 13 to repair her aortic valve. Her life was restricted—she frequently came down with fevers, went to many physician appointments and had to sit on the sidelines when her schoolmates engaged in sports.

For those with this condition, the valve that connects the heart’s left ventricle to the aorta has two leaflets, or cusps, instead of the usual three and the space between the leaflets is narrowed. This prevents the valve from opening fully and makes the heart work harder to pump blood to the rest of the body.

Her condition was under control until the fall of 2009, when, at age 35, she suddenly began to again experience symptoms. She says she felt “like a thousand needles were attacking my heart,” and knew something wasn’t right.

After learning from her cardiologist that she likely needed surgery to replace the bicuspid aortic valve that had been repaired when she was a teenager, Mrs. Bader sought a second opinion. A mother of a 5-year-old boy, she hoped to postpone surgery until after she was able to get pregnant and have another child. A referral from a colleague who had received care from specialists at the Bluhm Cardiovascular Institute at Northwestern Medicine led her to see Robert A. Silverberg, MD, cardiologist on the medical staff at Northwestern Memorial and associate professor of Medicine at Northwestern University Feinberg School of Medicine.

Dr. Silverberg recommended immediate surgery and arranged a consultation with cardiac surgeon Patrick M. McCarthy, MD, chief of the Division of Cardiac Surgery at Northwestern Memorial, executive director of the Bluhm Cardiovascular Institute and the Heller-Sacks Professor of Surgery at Northwestern University Feinberg School of Medicine.

“At my first meeting with Dr. McCarthy, he explained the procedure for replacing my aortic valve and discussed the pros and cons of the surgery,” Mrs. Bader says. “I knew immediately that I would be comfortable with him doing my surgery.”

She underwent the procedure in April of 2010 and was able to return to work just four weeks later at a Chicago law firm where she oversees billing. On Dr. Silverberg’s recommendation to improve her cardiovascular health, Mrs. Bader joined a health club and began exercising, something she had never done before.

“When I first joined the health club, I went every day and I felt like I was flying—I loved it,” says Mrs. Bader, who continues to exercise. “I felt so cool running with everybody else.”

In the fall of 2010, Mrs. Bader received wonderful news: she was pregnant with her second child. She delivered a healthy baby boy in the summer of 2011. “I’m so glad I had the surgery,” Mrs. Bader says. “My quality of life has improved so much.”