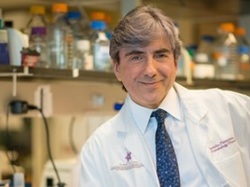 The current deputy director of the Lurie Cancer Center, Dr. Platanias arrived at Northwestern University Feinberg School of Medicine in 2002 as the Jesse, Sara, Andrew, Abigail, Benjamin and Elizabeth Lurie Professor of Oncology. Prior to joining the medical school, he was the chief of the Division of Hematology/Oncology at the University of Illinois at Chicago. In addition to his duties as interim director, he will continue his molecular biology and biochemistry research focused on signaling pathways in cancer cells.

Established in 1974, Northwestern’s cancer center was dedicated as the Robert H. Lurie Cancer Center of Northwestern University in 1991 through a transformative gift from Ann and Robert H. Lurie. In 1997, the center’s name was modified to reflect the National Cancer Institute (NCI) designation of the highly competitive “comprehensive” title — reflecting its dedication to the utmost standards of cancer research, patient care, education and community outreach.

“I am honored to become interim director of one of the leading cancer centers both nationally and internationally,” Dr. Platanias said. “We have experienced remarkable achievements under the outgoing leadership of Steve Rosen, MD, and are now well positioned for the next phase of growth.”

Dr. Platanias earned his medical degree and PhD from the University of Patras Medical School in Greece. After a research fellowship at the National Heart, Lung, and Blood Institute, he completed a residency in Internal Medicine at the State University of New York, Downstate Medical Center and a fellowship in Hematology-Oncology at the University of Chicago Hospitals.

Among his many career honors, Dr. Platanias received the 2013 Seymour & Vivian Milstein Award for Excellence in Interferon and Cytokine Research. The Milstein Award represents the pinnacle of scientific achievement in cytokine and interferon research. A member of various scientific societies, Dr. Platanias served as president of the International Society for Interferon and Cytokine Research in 2010-2011.

He currently sits on the editorial boards of the Journal of Biological Chemistry, Leukemia and Lymphoma and the Journal of Interferon and Cytokine Research, where he serves as an associate editor. Dr. Platanias has served as a member or chair in several review committees at the National Institutes of Health (NIH), the Department of Defense and the Department of Veterans Affairs. He is currently a member of the Cancer Immunopathobiology and Immunotherapy study section at NIH.  He has also completed terms in the Cancer Molecular Pathobiology study section and the Molecular Oncogenesis study section, where he was one of the founding members.

His research is funded by multiple R01 grants from the National Cancer Institute (NCI) and a Merit Review grant from the Department of Veterans Affairs. Dr. Platanias is also the principal investigator of the NCI T32 training grant in signal transduction and cancer.

A nationwide search to find the cancer center’s next permanent director will begin shortly.